Discovering the Septuagint: A Guided Reader 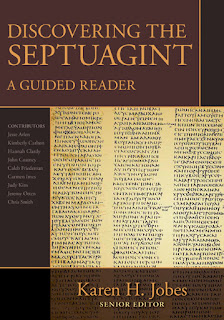 Discovering the Septuagint - A Guided Reader - by Karen Jobes is a very nice resource for those looking for an introduction to the Greek of the LXX (The Septuagint).  There are chapters dealing with selected passages from 9 books of the LXX, in each chapter there is an introduction telling you about that particular book and its translation techniques.   Then follows the  Rahlfs-Hanhart Greek text of an excerpt from that particular book and a brief examination of certain key words and phrases in each verse, notes on vocabulary and syntax. Then comes another excerpt of the Greek text and the notes on the various verses…etc.  After all of the selected texts are done being examined, then comes the NETS (New English Translation of the Septuagint) version of the passage(s) so that one may read the whole thing in English. And then finally, if verses from the chapter are cited in the New Testament, they have a table showing where in the NT the passage is referred to and a small summary of its context in the NT.

I like this study resource pretty well, and I like having an introduction to the language of the LXX.   Again, this is just an introduction to the study of the LXX, not necessarily a study resource, Jobes gives a list of recommended reference works on the LXX at the beginning of the book, as well as selected bibliography at the end of each chapter.

I especially like that Jobes points out that each book of the LXX "potentially gives us a 'snapshot' of what the Hebrew looked like at the time of its translation".  But she seems rather contradictory when she then goes on to say that, "In places, the Greek translators of the Hebrew Bible used forms of words and interpreted their text in ways (without being able to foresee it, of course) that were more congenial to the message of the New Testament than the corresponding Hebrew texts would have been…"  But if the LXX potentially gives us a look at what the Hebrew text looked like in the days of the Apostles, why not assume that the Hebrew text of that day actually said what the Apostles quoted from the Greek?  Why do we hold our present day Hebrew text  as being the authoritative text with which to judge an older translation of an older Hebrew text?  Why not even consider the thought that perhaps the translation that various Apostles used was actually a literal translation of their Hebrew text rather than a heavily interpretative translation?

Anyway, I do like this resource, and think that it will be quite handy for those looking to be introduced to the Greek of the LXX.  I think it would be really neat if they came out with a book doing basically the same thing with the full text of the LXX…especially if they also included the variants that are found in the various Greek OT manuscripts.

Many thanks to the folks at Kregel Academic for sending me a free review copy of this book! - My review did not have to be favorable.

One the the websites where this book may be purchased is at Christianbook.com
Posted by Sarah L. at 1:42 PM