Reasons For Belief - By Norman Geisler and Patty Tunnicliffe

"Every truth claim is narrow.  Why?  Because truth itself is narrow.  If you jump off a tall building with no ability to remain aloft, you will fall to the ground, yet no one would say belief in the law of gravity is being narrow-minded."    The authors of this book are very good at demonstrating the exclusiveness of truth, and our need to know the 'true-truth'.  Answering 10 questions about Christianity, the authors build their argument, 'closing in' on the truth as the book moves on.  Starting very basic, they demonstrate the logic of there being truth and that truth must be exclusive.  Then, after pointing out the obviousness of the existence of  a god, they narrow down to what god that is and if there is only one.   The rest of the book demonstrates that the God who exists is the God of the Old and New Testaments and upholds those Scriptures as the truth by answering questions about their composition and content. 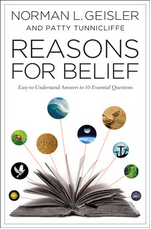 This book includes several charts comparing the beliefs of world religions to Christianity, and critiques several of the major religions.   Here are some of the authors' statements on Pantheism:  "The Designer is not the design anymore than painter is the painting", "...pantheists believe we can become God.  But we had a beginning; God did not.   How can people who had a beginning become the One who never began?  Pantheists believe that they can (by enlightenment) become God.   But God has always known he is God.  Anyone who suddenly realizes "I am God," isn't God."   The content of the Bible is used as the ultimate proof of God being God and I love that much attention is paid to whether or not Jesus is God.  Lots of Scriptures are used to demonstrate that Jesus was God, and that you can't reject that reality without contradicting Him.  They show that belief in a god is not enough, belief in The God of the Bible and belief of what God says in His word is shown to be crucial for all people.

I only gave this book four stars because I have found that the authors are apparently 'Old-earth Creationists'.  Using statements like, "If the universe had expanded faster than it did, no planets could have formed.  If no planets could form, there would be no earth."  Its not too explicit, they don't go into how much time the word 'day' is describing is in Genesis one, but it is implied that a day is a LOT longer than a day.  Later on, when they are talking about the existence of miracles, they state that "A genuine miracle happens instantly - not over a period of time."  So when God said, "Let there be light", was there light?  Or when God spoke the sun and the moon and the stars into existence, was it so? Or did it take a long period of time, longer than an evening and a morning, one day(Genesis 1: 19)?  This is why I don't know that I would recommend the book to non-Christians, as this might encourage them to not take the Beginning literally and so they may not take other narrative accounts in the Bible literally.

Thanks to Bethany House Publishers for giving me a free copy of this book in exchange for my review(which does not have to be favorable)
Posted by Sarah L. at 9:03 PM