Devotedly: The Personal Letters and Love Story of Jim and Elisabeth Elliot 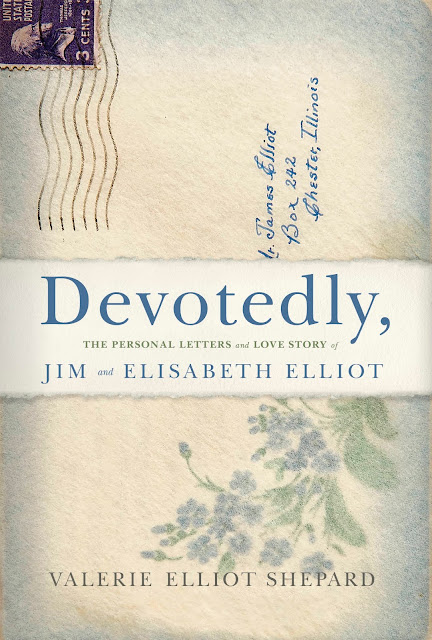 I have liked pretty much any Elisabeth Elliot (Gren) book I have read (I've read about three or four I think, but not the ones on marriage or relationships).  When I saw that this book was published, I was quite excited.  This is a book about Jim and Elisabeth's 'love story', told through many of their letters to each other and their journals.  Their daughter, Valerie, put it together and added commentary.

I was very disappointed by their relationship.  I had always had the impression that they were a model example in Christian pre-marital relationships.  After reading this book, I think that they are a horrible example to young men and women. I was quite shocked.

They started out liking each other, but not being sure whether the Lord would have them marry. All fine and good.  But then when you get to them still not being sure whether or not the Lord would have them marry,(actually for a while,  Jim was quite sure that the Lord wanted him to be single)but they act all loverlike, with certain things they write in their letters and  in their physical relationship holding hands and other physical touching.

In one instance, while they were still in the "maybe God wants us to stay single, not sure about getting engaged" stage, the daughter comments: "I still marvel at how little physical touch they'd actually experienced.  All they'd allowed themselves were a few embraces, hand holding, possibly a kiss on the cheek.  But how important to learn from my amazing parents that their absolute priority remained the love of God, dependence on God, and continual prayer for His leading."  Ummm…that was not right.  These were not brotherly embraces/hand holding/ kisses, these were romantic ones.  Hardly following what the Apostle Paul told Timothy, to treat the young women as sisters, "with all purity"(1 Tim 5:2)

In a letter to Elisabeth from Jim (again before getting a "word from the Lord" that they should marry). he talks about what happened some time before, when they had been together somewhere: he had been "feigning sleepiness, I crowded you against the clothing hung against the door - how your body stiffened as my hand made its way to being received by your fingers - how the whole of you slackened and my fingers were pressed to your lips. "  He goes on to say, "We will, I suppose, get used to each other, the feel and smell and look of one another…"

I don't understand that.  If marriage is not on the docket, how could you say that? How could you do that in all purity before God?

And then Jim writes in a letter, while they were still wondering about God's will for their relationship, "I dreamed about you last night.  Coming home last evening and reading your letter before I slept was like coming home to you, almost.  You came to me in bed serious and shivering.  I made you laugh and warmed you with my body.  Such things are seldom, and I enjoyed it because it seemed good and right, and not much like a dream…."

But what about what the Apostle Paul states in 1 Corinthians 7, where it is better to marry than to burn with passion? Jim was definitely struggling with 'burning with passion'(you see it even more clearly in other spots, even admitted as a struggle by himself, in this book).  It's not as though Elisabeth and Jim were strongly doubting whether the other was a Christian or not; rather they each, for the most part, were crazy about the other and their devotion to the Lord.  Their parents were not opposing the match either.  All signs, including the Bible itself, were pointing towards their needing to get married.  Pointing to God's will for them to be joined together in marriage before Him.  It's as though they didn't see Scripture as the authority unless it gave them some sort of assured feeling. Rather than heeding what it explicitly said about man/woman relationships, they waited for an extrabiblical sign/feeling.

Even Elisabeth's brother, Dave, kept warning Jim about playing with Elisabeth's heart.  But they both disregarded him, or anyone else who looked at their relationship critically.  Their daughter comments at one spot, "Though no one could seem to understand why they weren't' getting engaged and making plans to go to the mission field together…..she knew she'd put God first and knew my father was attempting to do the same thing…And as long as God's will was uppermost in each of their hearts, they were under no obligation to explain themselves to anyone or give out all the details of their prayer life and relationship dynamics".

And then, when they finally get engaged, Jim seems to want even more physical contact and justifies it by saying that 1 Corinthians 7:1 (It is good for a man not to touch a woman) was speaking of "an unmarried man sharing another's wife", not a man engaged to be married.  The daughter quotes him, interspersing her own words,"'it does not apply to my play with Betty," which meant he could enjoy 'further liberty with her body' without being guilty of fornication, once they were engaged."  According to Jim Elliot's views, at the time,  it's okay for engaged couples to touch one another's bodies as long as they don't have sex?  Huh??? I am incredulous at several of his interpretations and applications of various passages.  I don't understand how this is keeping with the passage that says to "keep the marriage bed holy" (Heb 13:4).

Being engaged means that the couple are set-aside for each other, no one else, but they don't belong to each other before God yet - so no playing with one another's bodies, even if it's not sexual.  God has not yet joined you together, so don't act as though He has. Wait until you are married.

All in all, I was VERY disappointed.  I was reading this book aloud with my sister, and I had to skip several spots, because they were indecent and made me blush.  Yes, Jim and Elisabeth seemed to be Christians, but that doesn't mean that everything that they did was Christ-like and should be followed.  I could not recommend this book to any couple because it does not promote true Godly pre-marital relationships.  I'll end with a section from 1 Thessalonians 4:"For this is the will of God, even your sanctification, that ye abstain from fornication; that each one of you know how to possess himself of his own vessel in sanctification and honor, not in the passion of lust, even as the Gentiles who know not God; that no man transgress, and wrong his brother in the matter: because the Lord is an avenger in all these things, as also we forewarned you and testified. For God called us not for uncleanness, but in sanctification. "(1Th 4:3-7)

I received a free review copy of this book from B&H Publishers.  My review did not have to be favorable.

This book is sold on Christianbook.com and Amazon.com