Though I'm still a beginner in learning Koine Greek, I still like to snap up any Koine Greek language resource that I can when any becomes available to review - especially since my sisters are more advanced (and more faithful in) in the study of Greek than I am.  I like to find various language resources to use as Christmas presents for them and my dad (a pastor).  In The Handy Guide to Difficult and Irregular Greek Verbs: Aids for Readers of the Greek New Testament is an excellent idea!

Upon receiving the book, I began having doubts as to whether I should actually have requested to review it, I became afraid that it was rather over my head - my fault because I have not kept up with my Koine Greek.  But in studying the book more closely, it proves to have great potential as an extremely valuable resource in New Testament reading, and one that I will definitely give to one of my more advanced family members for Christmas. 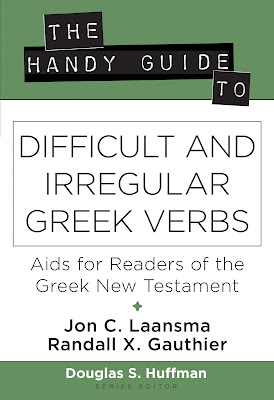 This book compiles a list of difficult and irregular Greek verb principal parts, and also has a list of the verbs with their compounds (frequency of NT occurrence of each compound verb also noted). This listing of how many times each individual verb appears in the New Testament makes it easier to better prioritize the verbs that are being committed to memory.   If a verb occurs a lot in the New Testament it makes sense to learn it at the beginning of study rather than at an advanced stage of Greek.  As the authors put explain, "What good is it to know that trecho is glossed I run if what one actually sees while reading is edramen?"(I made an attempt at transliterating the Greek words they mention as I don't want to figure out how to get the Greek font). Laansma and Gauthier look to remedy that problem for Koine Greek learners who are moving out of the beginners stage of Greek and who frequently practice their Greek by actually reading large portions of the New Testament (instead of mere isolated verses).

I recommend this book highly for those learning Koine Greek!

Many thanks to the folks at Kregel Academic for sending me a free review copy of this book to review (My review did not have to be favorable).

This book may be purchased at (among other places) Amazon and Christianbook.com
Posted by Sarah L. at 3:08 PM