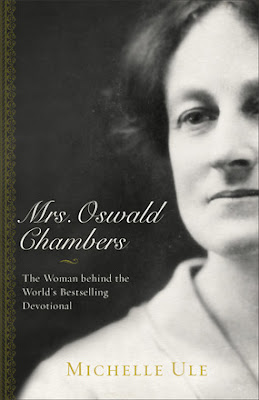 The only thing I knew about Oswald Chambers was that he wrote the devotional, My Utmost For His Highest, which I looked through some years ago (I don't remember if I read it all the way through) and liked some of the concepts that I found in it.  When I saw this biography of his wife I thought that it would be a good way to know more about the couple. It  really informed me quite a bit and gave me a better picture of these two people, or a rather it gave me the only picture I've had so far as I didn't know really anything at all about them.

Gertrude Annie Hobbes, known as "Biddy" (Oswald's nickname for her), was not expecting the life that God had planned for her. She had trained for and had become excellent at taking shorthand notes and was a good typist as well.  Her goal was to be the first female secretary to the prime minister of England. God had other plans.  She and Oswald Chambers initially 'fell' in love on a ten day voyage to America.   Oswald was a  volunteer circuit lecturer for the League of Prayer and had been asked by her mother to look after her daughter on the trip.  He was already acquainted with Biddy, but this trip solidified a friendship between the two and initiated a correspondence between them and visits, which led to their becoming engaged and then married.

They served the Lord together, starting a Bible training college for the League of Prayer and after some years, during World War I they left England to work with the YMCA in Egypt ministering to soldiers stationed there. They brought their only child, Kathleen, with them.  I really appreciated that instead of seeing Kathleen as secondary to the primary work of ministering to other people, and sending her off to boarding school or having her live with relatives or another family (as other couples involved in mission work sometimes did), they saw her as their own God given responsibility and another person whom God gave them to minister to and so they took her with them.  While there, Biddy transcribed Oswald's messages in shorthand, as she had done in England.

After some time of ministering in Egypt Oswald died and Biddy was left a widow and with a young child to look after.  Biddy didn't despair and kept on with the work that she believed God still wanted her to do.  She took over some of the teaching sessions Oswald had held and often used his works, reading out loud from them.  Some time after World War I ended Biddy and Kathleen returned home and Biddy continued the work she had started while in Egypt, of typing up and translating her shorthand notes of Oswald's lectures  (she had trunks/boxes full of them) and sorting through and compiling them into pamphlets and books.  She saw it as a God-ordained ministry granted to her, to organize and publish her husband's preaching.  Late in life Biddy ended up having some mental problems (not fully explained) and she died in 1966 at the age of eighty two.

I want to mention that I had some concerns about Biddy and Oswald's beliefs.  But let me say first that this biography seems more like an overview of the couple and their faith,  so I am not sure the extent of their beliefs in most of these things.  I'll mention a few of my concerns.  First, they were associated with the Holiness movement, and from what I understand that is associated with believing that Christians can attain perfect sinless lives on this earth despite having yet unglorified bodies.  But Biddy and Oswald never seemed to think that they ever attained that perfection, at least from what I learned of them in this book.

Second, they had some weird views of how God directs His people.  They used isolated verses from the Bible to confirm some of their decisions. For instance, while in Egypt, having gone there before sending for Biddy and Kathleen, Oswald was trying to figure out where they would live. I quote from the book,  "Oswald possessed no funds to build but expected God to supply what he required.  God confirmed the decision when Oswald dread the Daily Light verse that night, taken from 2 Chronicles 6:18: 'Behold, heaven and the heaven of heavens cannot contain thee; how much less this house which I have built!'"  That was just plain weird. I think that Chambers was highly in error in treating the Scriptures that way and that he was treading on dangerous ground.  That type of hermeneutics seems to make people lean toward becoming modern false 'prophets'.  Saying, "thus sayeth the Lord!" when the Lord has not said it (see Ezek 22:28).  If the context of the Scriptures do not matter, and if we do not use a literal, grammatical, historical hermeneutic then the Scriptures can be made to say anything we want them to say!

And lastly, Biddy 'preached' at times, and that to men.  She led some of the study sessions through the Bible (including leading some of the Sunday sessions), and had other studies while in Egypt.  I am not sure if she used Oswald's lectures (reading them out loud as she often did for the classes she took over) or if she came up with her own.  I felt rather uncomfortable with that as it goes against what the Bible says about women not speaking in a teaching position in an assembly of the church that includes men (and she mainly would have had men as her audience out there in Egypt).

Despite concerns like the above I still liked this biography, it was well written and quite interesting.  And I still liked Biddy and Oswald overall and thought that they were good examples, especially in realizing the sovereignty of God in life, and their submission to whatever He ordained to happen in their lives (even recognizing His hand in the interruptions of daily life).  I'll end with a quote (from Oswald I think) that I particularly liked, "We have to trust in God whether He sends us money or not, whether He gives us health or not.  We must have faith in God, not in His gifts."

Many thanks to the folks at Baker Books for sending me a free review copy of this book (My review did not have to be favorable)!

This book may be purchased at places like Amazon and Christianbook.com
Posted by Sarah L. at 2:53 PM