I have never reviewed a game before, but this one caught my attention as some of my brothers and sisters love to pun and I wanted to see if it would make a good Christmas present for one or all of them.  I wasn't disappointed.

The object of the game is to collect 10 pairs of pun prompt cards.  You win prompt cards by coming up with the best (or sometimes the lamest) puns.  The Prompter draws two prompt cards reading the prompts and the players have 90 seconds to write own a single pun that combines the prompt word topics and then they give the paper on which their punning creation is written to the prompter who chooses which he likes best.  The winner of the round becomes the new prompter and the game continues until someone has ten pairs of prompt cards.  There are a few other aspects of the game (like a pre-pun-prompt round and also prizes one can set up for the end of the game) that I have not described but the main fun was trying to come up with puns to write down. 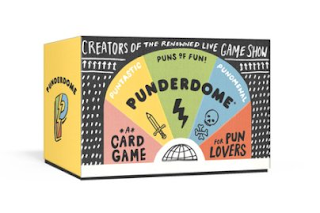 I had two of my sisters, who like myself are not good at punning, test it out with me and we had a blast!  We got off to a very slow start, starting off with a lot of silence (we did away with the time-limit as we weren't coming up with anything for a while) but then we picked up steam.
We were lame, we were horrible, many of our puns weren't even puns at first.  But it was FUN, mainly because we were laughing (and crying) so hard at ourselves.  To give you an example of how lame and non-punny we were, at one point the two prompts were "facial hair" and "breathing", all I could come up with was "beard-breath", which makes no sense!  If we had so much fun when we can't even pun I imagine that the punny ones of my family will really have a great time.  My sister bought two more sets of Punderdome so we can give it to all of our punny siblings at Christmas time.

Many thanks to the folks at Blogging For Books for sending me a free review copy of this game to review (my review did not have to be favorable)!

This game may be purchased from Amazon (and from other retailers)
Posted by Sarah L. at 10:47 AM

Email ThisBlogThis!Share to TwitterShare to FacebookShare to Pinterest
Labels: Games