An Appeal for the Study of Christian History

What constitutes a 'happy ending' in our eyes?  Usually it is the protagonist of the story receiving all that he ever hoped for, all he ever wanted.  The stories that we like to read, watch or hear about are not usually those in which the main character is mistreated the whole of their life.  If the person has a happy end to their life, I suppose we could live with that.  But  what about a story where someone lives and dies unloved, hated, persecuted, materially poor and who doesn't get his promised inheritance? A person who lives every day killing their own dreams, desires and aspirations, and this deliberately?  Not trying to be their own person, but Another's? A person who determines to ignore their own heart and follow Another's?  A person who doesn't assert their own 'rights' but lets others trample on them?  Would we consider that a happy ending?  From a human perspective, I think not. 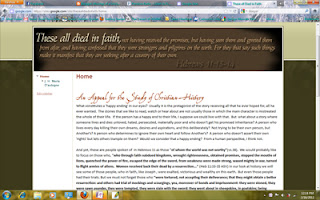 And yet, these are people spoken of  in Hebrews 11 as those "of whom the world was not worthy"(vs.38).  We would probably like to focus on those who, "who through faith subdued kingdoms, wrought righteousness, obtained promises, stopped the mouths of lions, quenched the power of fire, escaped the edge of the sword, from weakness were made strong, waxed mighty in war, turned to flight armies of aliens.  Women received back their dead by a resurrection..." (Heb 11:33-35 ASV) In our look at history we will see some of those people, who in faith, like Joseph , were exalted, victorious and wealthy on this earth.  But even those people had their trials. But we must not forget those who "were tortured, not accepting their deliverance; that they might obtain a better resurrection: and others had trial of mockings and scourgings, yea, moreover of bonds and imprisonment: they were stoned, they were sawn asunder, they were tempted, they were slain with the sword: they went about in sheepskins, in goatskins; being destitute, afflicted, ill-treated (of whom the world was not worthy), wandering in deserts and mountains and caves, and the holes of the earth." (Heb 11:35-38 ASV)

In looking at this "cloud of witnesses", these people who testify to the worthiness of living by faith,"let us also, seeing we are compassed about with so great a cloud of witnesses, lay aside every weight, and the sin which doth so easily beset us, and let us run with patience the race that is set before us, looking unto Jesus the author and perfecter of our faith, who for the joy that was set before him endured the cross, despising shame, and hath sat down at the right hand of the throne of God." (Heb 12:1-2 ASV) Let us follow their example. We seek, not to look at these people for their own sake, but rather to imitate their faith. It might be objected that these people were sinners still, and that we should only follow Christ. Actually, these Christians were saints called by God in His word to act as such.   Let us follow them insomuch as they followed Christ.  As Paul said, "Be imitators of me, as I am also of Christ."(1Co 11:1 LITV)  .  Let us look to where they were looking in faith, to God and His promises.  Let us focus on our true 'Fatherland', as they did, and let us live as strangers on this earth, as they did; Living as our King would have us, not following the 'fashion' of this world.

Led me end my appeal for the study of history with a quotation by E. Godet in which he is writing a recommendation for one of J. H. Merle D'aubine's books on the History of the Reformation:

"What difference there is between the perusal of a work of this kind and that of one of the religious novels with which our public is now satiated. In these latter, notwithstanding all the good-will of the authors, there is always, or nearly always, something unwholesome. Imagination, that admirable gift of God, is employed to transport us into the chiaro-osouro(?) of fictitious scenes, which communicate a kind of fascination from which it is difficult to emerge, to return to the humdrum of every-day life, and to confine ourselves to the narrow limits of our every-day duties. Here on the contrary we find the full light of historic truth, imagination restored to its true object - that of giving life to real facts. The faith of this martyr, it really struggled, really triumphed - this blood, it really flowed - this pile, its flames lighted up the surrounding country, but in so doing they really consumed their victim. When we read these true histories our hearts do not swell with vain ambition or aspire to an inaccessible ideal. We do not say: 'If I were this one, or that one.' We are obliged to commune with ourselves, to examine our consciences, to humble ourselves with the question: What would become of me if I were called to profess my faith through similar sufferings? Each on of us is thus called to less self-complacency, to greater humility, but at the same time to greater contentment with his lot, to greater anxiety to serve his God with greater faithfulness and greater activity..."

To furthur this type of study, I'm putting together a site with reviews and recommendations of books, including ones that are free online(It's still a work in progress, I'm planning on continually adding more to it, so keep checking back):  https://sites.google.com/site/thesealldiedinfaith/
Posted by Sarah L. at 12:18 PM No comments: