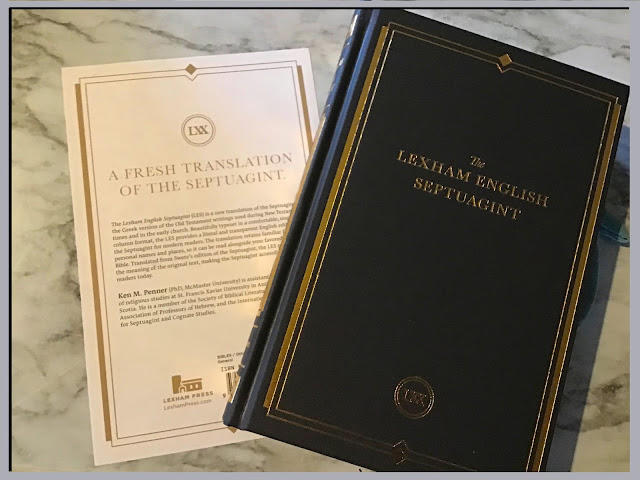 I was quite excited when I saw that a new English translation of the Septuagint was coming out. I'm always interested in new Septuagint resources.

This  translation is a nice one to add to this list, it is particularly interesting because of the way they give more, unique translations that you may not have otherwise considered.  For instance, in the Psalms, one of the "headers" I'm used to seeing is usually something like,  "To the Chief Musician: A Psalm of David".  In one of the other English LXXs I have, the NETS Bible, it is translated, "Regarding Completion.  A Psalm.  Pertaining to Dauid."   Well, this new translation, has, "For the End: A Psalm of David". When I saw that it was a like a lightbulb turned on.  "For THE END?"  As in, the "End times", "last days", the end of the world?

I mentioned it to one of my sisters (who loves studying and learning koine Greek), and she looked up the word for "end" and it was telos, which is used in some other places in the Bible to refer to the end times (For instance, Matt.  24:13-14).  That sort of put a whole new perspective on the Psalms, not that we didn't think any of them were prophetic before (obviously the Messianic ones were), it's just that, if this view is correct, many of these Psalms are directly said to be speaking about the end times.  Some of them certainly sound eschatological, for instance, "Our God is a place of refuge and strength, a helper when afflictions find us very much.  On account of this, we will not fear when the earth is troubled and the mountains are transferred in the hearts of the seas…Come, see the works of the Lord, which he set as wonders upon the earth.  Removing wars until the ends of the earth, he will crush bow and shatter weapon…." (Psalm 45: 1-10)

Another interesting nuance in translation is Amos 9:1. The ASV (Using the Masoretic text) reads:  "I saw the Lord standing beside the altar: and he said, Smite the capitals, that the thresholds may shake…"

Brenton's English LXX reads: "I saw the Lord standing on the altar: and he said, Smite the mercy-seat, and the porch shall be shaken"

The LEX reads, "I saw the Lord standing by the alter, and he said, 'Strike upon the lid of the Ark of the Covenant and the gateway will be shaken…"

You'll notice some significant/interesting differences between this text and the Masoretic.  If you grab a Hebrew based Old Testament and turn to Daniel 11:1-2, I'll quote it from the ASV: "And as for me, in the first year of Darius the Mede, I stood up to confirm and strengthen him. And now will I show thee the truth. Behold, there shall stand up yet three kings in Persia; and the fourth shall be far richer than they all: and when he is waxed strong through his riches, he shall stir up all against the realm of Greece."And then compare it to this English Septuagint:   "And in the first year of King Cyrus, he spoke to me to strengthen me and to make me act valiantly.  And now I have come to impart the truth to you.  Look, three kings have arisen in Persia, and a fourth will arise…."  That's a rather significant difference as it changes who the coming Kings are.  Are we supposed to count starting from Darius or Cyrus? Makes for some interesting eschatological problems.

One of the main reasons the Septuagint is so interesting is that there are places in the New Testament where, when Christ and the Apostles quote certain texts from the Old Testament and their quotations line up significantly more with the LXX than with the Masoretic text.  And that's where I want to explain a part in this translation that I didn't particularly like. In Psalm 39 (Psalm 40 in a 'regular' Bible) vs 7 is translated, "You did not want sacrifice and offering, but you restored a body to me."  "Restored", instead of, "prepared" or "made" a body for me as English translators often render that word in translating the author of Hebrews' quotation of that verse in 10:5. Now some may point out that it's still better than the Masoretic text  (the Hebrew text recension pretty much all of our Old Testaments are based on now), which doesn't say anything similar. The problem I have is that, to me, "Restored" sounds as though a body was had, taken away or lost, and then given back.  It just seems to carry a different picture from how the author of Hebrews saw/read the text in Hebrews 10 (and the Greek word there seems to be the same as the one in Swete's Greek text for the Psalm).  The author of Hebrews seemed to view that verse as indicating that a body was prepared for Christ to offer it as a sacrifice.  Now I can see a way around it by saying, "well, look at it this way, 'restored' makes it seem as though He'd been given a body back that he'd had before, so maybe it could be referring to the resurrection of Christ."  Ehh…maybe? But again, that's not how the writer of Hebrews seemed to read it.

Anyway, I felt like I had to get that out.  Moving on now.

Be sure to read the Introduction to this translation, it's very interesting, telling about the translators'/editors' goal of making your experience in reading this translation like the experience of those originally reading the Greek translation.  So instead of trying to bring the terminology to match today's culture, they "bring today's reader to the ancient culture", so if the language was originally not as gender inclusive as we would be today, they stick with the more gender exclusive language.  If the original Greek translation of the Hebrew was a bit awkward, the English will read awkwardly,   "The English translation should feel idiomatic where the Greek is idiomatic.  It should feel formal where the Greek is formal.  It should feel foreign where the Greek feels foreign.  In other words, it is not only acceptable, it is positively desirable for the LES to feel like a translation, to the extent that the Greek readers would have been aware that they were reading a translation.  Ideally, the translation should be as rough or as smooth as the Greek would have seemed to a Greek reader who knew no Hebrew…"  I really appreciate that.

I like the format of this book as well. I don't want to check right now, but I’m pretty sure that all of my other English translations of the LXX have the text laid out in two columns on each page.  This one only has one column of text, so it reads like a regular book.  The cover is very beautiful as well, I was quite impressed just by its looks when I opened up the box.

I really like the LES overall. I own several English translations of the LXX, and I have never really found one that I prefer above the others, rather, I find all of them equally great study and reference resources to have around. This one is a great edition to any collection of Septuagints.

Many thanks to the folks at Lexham Press for sending me a free review copy of this book (My review did not have to be favorable).