Ship of Dreams - By Gareth Russell 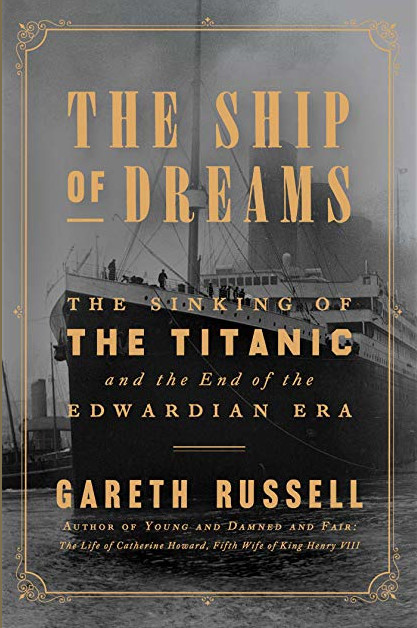 The Ship of Dreams:  The Sinking of the Titanic: and the End of the Edwardian Era by Gareth Russell.
This book gives another look at the sinking of the Titanic, focusing in in on The Countess of Rothes, Thomas Andrews, Isidor and Ida Straus, the Thayer family, and Dorothy Gibson.

I read this aloud to one of my sisters.  Sadly, we didn't particularly like this recounting of the sinking. First, though I completely understand giving background to characters you are introducing in the book, I wasn't used to how long the character introductions were.  I suppose they were probably not really much longer than any other historical introduction of characters in any given book, but they seemed longer because they kept interrupting the narrative of the time of the passengers on the Titanic.  I would have preferred that the biographies had been placed at the beginning, before getting on the Titanic.  But then, I suppose there wouldn't have been as much time spent 'on' the ship as it were, because it mainly focuses on a select group of people and the events happened pretty fast. Of course, this biography thing is just a matter of taste and others may not mind it.

Second, and this also is just a matter of personal preference: there are many 'rabbit trails' that are scattered throughout this book.  The 'rabbit trails' are, in my opinion, longer than necessary historical background of various things. For instance at one of the meals on the Titanic , "Conversation at the table flitted between what was happening on Wall Street, the misspending US presidential election, the forthcoming nuptials of the Wideners' eldest daughter and the Titanic's speed.  The November election was shaping up to be both vicious and important for the country…" A few things could have been mentioned about this election, but it goes on for what seemed quite a while (we ended up skipping it).  I felt like saying, "No, I want to stay on the ship! I don't care to hear all of this about the Presidential election!" Some of these rabbit trails just didn't seem to have much relevance to the topic at hand.

But the biggest problem I had was that there were many details given about people's private lives that I didn't care to know much about.  Maybe a short summary would have been fine as historical information about the person, but I don't want to go into detail about someone's affairs, someone's sexual life.  My sister and I ended up skipping most of that as well.

There of course were many interesting things in the book, but overall the other things were too distracting.  It just seemed as though we were skipping quite a bit out of indifference to what was being talked about, more wanting to get back to what was happening on the Titanic itself, rather than  learning (what seemed like) a lot about any particular person's personal issues or going into detail about some historical thing that had happened on land in the past or that was happening at the time of the narrative itself.

Many thanks to the folks at Atria Books for sending me a free review copy of this book (My review did not have to be favorable).

My Rating: Two out of Five Stars
**

Email ThisBlogThis!Share to TwitterShare to FacebookShare to Pinterest
Labels: history