Once Upon a Word - by Jess Zafarris 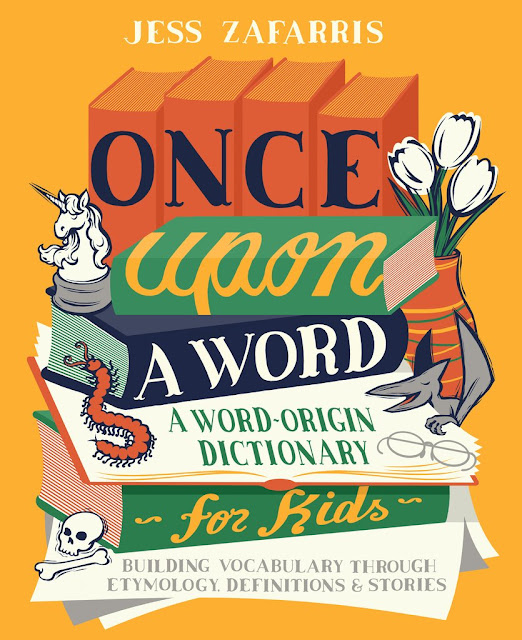 Once Upon A Word: A Word-Origin Dictionary For Kids - by Jess Zafarris is interesting for adults too.   It is a very interesting dictionary, not just stating origins and meanings in a dry, matter of fact way, but making it more like someone is right there speaking to you.

It's interesting how much one realizes one doesn't know about certain words, for instance, the word "shiver", "The word 'shiver' originally referred to a small piece or splinter of something, or the act of breaking something into many small pieces.  When pirates say 'shiver me timbers,' they're talking about the splintering of their wooden ships during battles on rough seas…."  I just thought it was some weird expression pirates used, probably referring to a shiver being sent down their body because of surprise, this was an interesting correction to my long held idea.

The word origin of "Alarm" I found quite amusing, it apparently comes from an Italian military cry, meaning "to arms!!" It struck me funny that therefore, when we're waking up to an 'alarm' we've set, it's sort of like startling us awake with "TO ARMS! Get your weapons, get ready for battle!" Which, from a Christian perspective that definition is actually pretty fitting considering the spiritual warfare we wake up to every day.

Some of the origins could have used a little more explanation, for instance, the section on IDENTITY just says, "Your identity is, very basically, what and who you are.  It can also describe the way you understand yourself and the way the word sees you.  The word comes from the Latin idem, meaning 'the same.'"  Why does it come from that Latin word? I'd like to see a little more connection there.  But that's more of a fluke. A lot of the definitions give you good explanations - for instance, the word ILLUSION:  "…The word 'illusion' originally meant 'mockery' or scorning,' from the Latin illudere, meaning 'to mock' or 'to play with.'  This is because an illusionist plays with what you think you see."  I see the connection there.

Some give you some insight to the different thinking of people before our time, like the word "Muscle":  "'Muscle' comes from the  Latin word for muscle, musculus, which is also translated as 'little mouse.' it comes from the Latin base word mus, meaning 'mouse.'  Muscles are named after mice because it was thought that flexing your muscles made it look like mice were crawling under your skin!"  I don't think I would have ever thought of it that way!  It's interesting and amusing to think of the way we think now vs the seemingly strange lines of thinking they had back in time…though I suppose many of our lines are thinking are strange, we just don't think that because we're used to them.

The book also includes several charts giving you many Greek and Latin root words, and many prefixes and suffixes to help you learn how to start figuring out words just from knowing the meaning of different parts.

Overall, this is a very interesting, amusing and informative book…for kids and adults!

I received a free copy of this book from the publisher. My review did not have to be favorable.