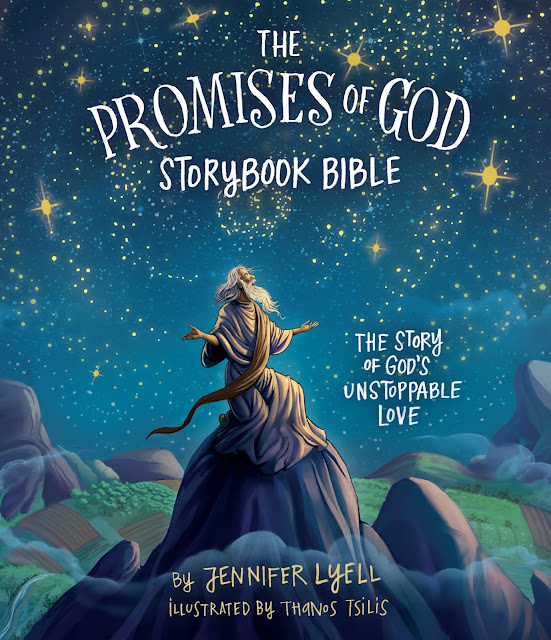 The Promises of God Storybook Bible is a high level overview of many of the accounts in the Bible aimed at children. I liked several aspects of it, for one, it doesn't shy away from teaching what many would consider 'deep' truths, that even adults struggle with.  It seems to go by the premise that kids will take God's word in faith (as we all must do). Here are some excerpts to illustrate this, "…He is only one God, but He has three persons that are all completely that one God" and, "He has always known every single thing that was going to happen, and nothing ever happens without His permission.  That means when we hear about something that happened in the Bible, where someone disobeyed God or it seems like God's plans were messed up, God's plans were never messed up. "  It doesn't shy away from concepts of God's sovereignty, for instance in dealing with Rahab the harlot it says, "God had made it so that Rahab would hear all these things, and then He changed her heart to want to follow Him."

At first I was afraid that this book would promote, or at least leave room for, Creation taking place for millions of years.  At first it seemed that it was at least leaving room for that concept as it didn't initially describe six "days", but then it actually did seem to get more specific: "God filled the water with fish and animals that swim!  Big fish and little fish.  They were all created in one second because He said they should exist." Okay, the term "One second" certainly doesn't leave room for evolution! I do wish that it would have clarified creation as taking place in six days though.

This book needs some clarification/corrective commentary if read to/by kids.  I'll give a few examples:  For one thing, the book seems to assume that there were sacrifices for sin before the Mosaic law.  It teaches that God told Abraham to kill Isaac as a sacrifice for sin. I don't remember God specifying that it would be a sacrifice for sin, just that he was to offer Isaac up as a burnt offering (were all 'burnt offerings' sacrifices for sin?).  Also, later on, in dealing with Moses, after he flees Egypt, "The Bible doesn't tell us for sure, but it seems that during this time Moses asked God's forgiveness for killing the Egyptian and made the sacrifice he had to make for that sin."  Again, perhaps I'm wrong, but I thought that sin sacrifices, in particular, were not instituted by God until the Mosaic law.

It also reads things into some of the accounts.  For instance, it talks about Abraham being worried that God really as going to make him kill his own son.  "His heart must have been beating so hard, and he was probably had tears in his eyes as he worried that maybe God really was going to make him kill his own son." The Bible doesn't say that Abraham was worried that he MIGHT have to actually kill his son, he actually didn't seem to have any question as to whether or not he would have to kill his son, rather he seemed to have instantly made up his mind that he would kill his son because God had told him to do it.  He was all in, also evidenced by his contemplating that God can even bring people back from the dead.

In the illustrations, Aaron looks significantly younger than Moses - that seems weird as Aaron was older than Moses.  Also, and I expected this, but there are illustrations of Christ.  I always feel a bit uncomfortable with depictions of Christ, and still do - especially with cartoon illustrations.  These aren't as strange and irreverent seeming as some (Beginner's Bible), but still make me uneasy.

Anyway, this book is sort of an overview/ paraphrase with some interpretative commentary thrown in.

Many thanks to the folks at B&H publishers for sending me a free review copy of this book. My review did not have to be favorable.

This book may be purchased at Christianbook.com and Amazon.com
Posted by Sarah L. at 10:29 AM