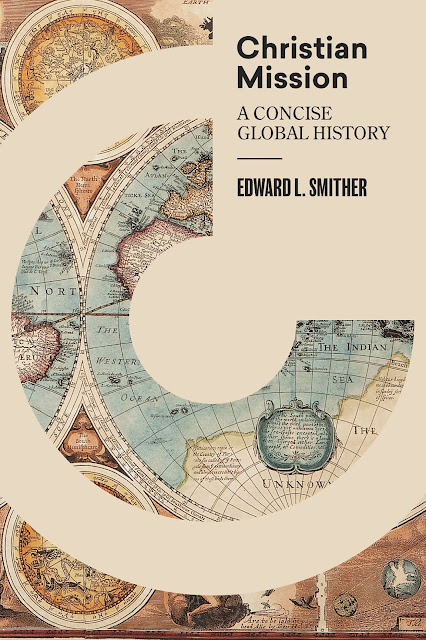 Christian Mission: A Concise Global History by Edward Smither is a book gives the history of the spread of the Gospel by professing Christians.  It follows it spreading down through the years through various continents.  Each chapter deals with different time periods of its spreading: "Mission in the Early Church", "Mission in the Medieval church", "Mission in the Early Modern Church"…etc.  It was quite interesting to learn about various people God used in its spread it.  I also loved the maps, they were very interesting in and of themselves, Maps showing the Roman Empire, Territories and Voyages of the Vikings, and one showing the colonization of Africa after the "Berlin Conference of 1884"" I didn't realize that European countries had control of pretty much the whole of Africa as one map showed the colonization of Africa by Europe, France, Belguim..etc.

I found it very interesting that some  of the early missionaries were simply Christian merchants giving out the Gospel as they went about their business.

But there were several things that made me not very fond of the book overall.  First, from various things the author says, he seems to believe that Roman Catholicism promotes the true Gospel.  I didn't understand that.  Just because someone believes that the Bible teaches the Word of God, believes in the Trinity and that Christ provides salvation does not mean that they are saved or that they are preaching or believing the saving Gospel.  You can preach a false Gospel that promotes the Bible, to some degree, includes the Trinity and Jesus dying for the sins of mankind.  I don't doubt that  there could be and were some true Christians within the Roman Catholic church structure, but it's in spite of it, not because they promote the true Gospel.

This is what I understand of Roman Catholicism: they promote other mediators between God and man:  besides Christ Jesus, they have Mary and the Saints as mediators, which directly contradicts 1 Timothy 2:5:  which says that there is one mediator between God and men, Jesus Christ. I've also gathered that, you can either do your own good works to earn grace/forgiveness (like penance), and you can rely upon the good works/merit of past saints to earn you grace as well.  Otherwise you'll clean your slate in purgatory, which is still heresy as it takes away from Christ's marvelous saving grace (without our works being a part of it) and demonstrates a heretical perspective of sin, how bad it actually is (as if we could actually have the capacity to completely pay for it ourselves over any period of time).  These things are in one way or another a works based salvation which is not true salvation (Eph 2:8-9; 2 Tim 1:9; Rom 3:28…and more)

We must remember that the Apostle Paul spoke vehemently against works based salvation and in writing to the Galatians he writes against them accepting any Gospel that does not match up with what he and the other Apostles taught and that anyone, even if it is an angel, who is teaching another Gospel was to be "Anathema"(Gal 1:6-9).

And another things I didn't like was that the Smither seems to think that organized mission movements are necessary.  He says things like, ""The sixteenth century protestant reformation did not produce a viable global missionary movement that paralleled the work of the Jesuits, who had emerged from the Catholic Reformation. - How do we explain this lack of global engagement in mission on the part of sixteenth century protestants?" and also  "A pastor has a duty to send members out as missionaries or to minister to immigrants in his community".  Where does the Bible say this? Pastors, yes, should give out the Gospel when God gives them opportunity, but their task is not to focus on unbelievers, but on believers, they are primarily to watch over the flock of God (Acts 20:28; 1 Pet 5:1-2) .  Smithers mentions Roland Allen in this book, an Anglican missionary who ended up critiquing the way mission work was done (like having organized missions), I've read Allen's book, "The Spontaneous Expansion of the Church and the Causes that Hinder It" and highly recommend it.  He challenges the assumption that we need to force and organize mission work and explains that the church will grow 'spontaneously', as it were because true Christians WILL evangelize on their own without needing a parachurch organization to do it and without a pastor needing to organize it.

As I mentioned, it is quite an interesting book, it's that the above perspectives of the author made me not like the book overall.

This book may be purchased at Amazon.com and Christianbook.com