Shoot For the Moon - by James Donovan 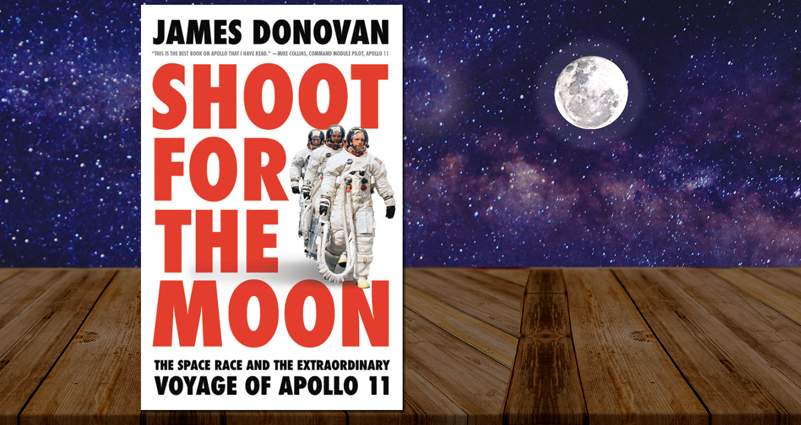 Shoot for the Moon: The Space Race and the Extraordinary Voyage of Apollo 11 by James Donovan is a truly riveting book. I read it out loud to one of my sisters and we were both pretty glued to it. We read it over the space (no pun intended) of about three or four days.  We have never really read a book about the race to space and this book was a good introduction to it all.

As the title implies, it details the space race between the Russians and Americans to get someone into space, and on the moon, first and thus doing it as fast as possible.

The timeline is a little mixed up, but it works.  Generally speaking, the account is heading toward the Apollo 11 landing on the moon. But first, you are going to learn how this all got started.  You learn how NASA came into being and the Mercury, Gemini and Apollo programs, and details about the efforts of both the Russians and the Americans just to get out of our planet's atmosphere. It is quite intense at times.  The author writes very well, and, as I already mentioned, he really pulled my sister and I into the history.

Even the little details and challenges faced were fascinating to learn. I'll give several of them here: For instance, part of the problem faced by the designers of the first space crafts to exit our atmosphere was how to return them to earth safely without them burning up in the descent.  Part of what helped them was noticing what type of meteors made it all the way through the earth's atmosphere to the earth, "So when two of Faget's colleagues, Harvey Allen and Alfred Eggers, pointed out that meteors with rounded noses were aerodynamically stable and survived the searing heat of the plunge - they had been studying the concept for years…"  And another one: I'd never really considered that they had to use military/battlefield rockets to get into space.  It makes sense of course now.  And because the astronauts, upon reentry might end up landing anywhere on earth, they had to have survival training in a variety of environments.   I'll give one last interesting detail, while on their way to the moon they would put their spaceship into a rotation, essentially, spinning their way to the moon.  Why? Because the side facing the sun was too hot and could cause damage to the craft, but the side facing away from the sun was too cold and could also be a hazard, so in order to even it out they would put it into a spin.

Along the way, you are introduced to various people who took part in this grand mission to get a man on the moon. Donovan vividly portrays this large mix of individuals with, sometimes vastly, different backgrounds (one of the important men involved was a former SS officer who ended up on some Disney television presentations!), all using their various skills to work together to achieve one goal.

All in all, I really liked this book.  It really keeps the attention and interest all of the way through.* It really did almost seem as though we'd travelled back in time, as it were, to these historic events.

One more note.  It is fascinating for me to mull over the thought that, though God stopped people thousands of years ago from building the Tower of Babel, yet in the past hundred years, He has allowed us to go to the Moon.  When you learn that the Apollo 8 astronauts were the first to leave earth's orbit and go around the moon, it almost gives me chills to think that, when they looked out of the window and saw the earth looking so small, they were the first humans God allowed to see it from that perspective.

Many thanks to the folks at Little Brown and Company for sending me a free advanced review copy of this book.  My review did not have to be favorable. - Because I received an advanced copy of the book, some of the content may be different in the final publication

*You may want to know that there is some vulgar language and topics, also some swearing) in the book. Most of it was in actual quotations of the people in question.  Also there were some awkward historical details.  This was all stuff that I didn't care to know of so I just scribbled it out and didn't read those parts out loud.  And, I want to note that my liking this book does not mean that I agree with all of the author's political, moral, or scientific perspectives.

This book will be released on March 12th.  You may pre-order it at Amazon.com