So Close to Home by Michael J. Tougias and Alison O'Leary 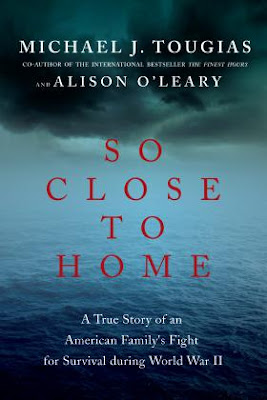 So Close to Home by Michael J. Tougias and Alison O'Leary is a riveting account of the amazing, providential survival and reunion of a family after the ship they are travelling on was torpedoed by a German submarine.

In 1942, the Downs Family, consisting of Ray and Ina Downs and two of their children, Lucille and Sonny Downs (their oldest son Terry was already in the U.S.), were making their way back to the United States from an eleven month stay in Columbia where Ray had taken a job with the United Fruit Company.  They began their journey home on a ship called the Heredia.

Their trip home was drastically interrupted. The night before they were to land at New Orleans, two torpedoes hit the ship.  The Downs' almost make it out onto the deck of this ship together but are separated by a lurch of the ship causing a surge of water to engulf them.  Ray is washed back inside the ship, while Ina, Lucille and Sonny are swept to various places on the decks and in the water, all find themselves separated from the rest of their family.

Ray is reunited with Sonny after a short while, Lucille is helped by the Second Mate of the Heredia while Ina struggles to survive on her own.  They all have encounters with sharks and suffer from long exposure to the elements.  All of them have to deal with their fears for each other, wondering whether the rest of their family is still alive and they all try to keep their composure during their ordeal.  Even little Sonny tries to be tough like his dad and succeeds in not breaking down.  The Downs' family ends up happily reunited, all of them amazed and grateful that they survived.

Heavily intermixed with the story of the Downs family story are the accounts of several U-boat Captains and their crews, including that of the Captain of the U-boat that sank the Heredia.  The authors interweave these accounts by jumping off many  incidents in the Downs' story to lead into history and facts about German submarines, their crews and other ships they sank.  I found it very interesting that, unlike the Japanese, many German Submarine Captains were kind and friendly to survivors of ships that they sank.   The most amazing one is probably the account of the sinking of the ship called the Laconia which carried many civilians.  The Captain of the U-boat who sunk her surfaced and took on many survivors, helped any injured, and ended up obtaining help from other German U-boats who also took on survivors and all of them towed several lifeboats in their wake and helped to repair lifeboats.

I'm going give a couple of negative comments here: First, I just want to note that book had some foul language, but it is easy enough to scribble out and to skip over (I've been reading it out-loud to some of my siblings).  Sometimes I don't want to know what people said exactly the way it was said, even if it is actually history.

Second, I was saddened to find that, though Ray and Ina Downs' seemed to be professing Christians, they ended up divorcing later in life. If they hadn't been Christians I wouldn't have thought much of it.  But they were professing Christians, and as such they could have shown the kind of unconditional love toward each other that God showed toward them. That was not a good example of a Christian marriage, that they loved each other conditionally rather than unconditionally.  It is quite disheartening to think that they had the stamina to survive a ship's sinking, almost being drowned or eaten by sharks and yet they didn't have the stamina to choose to keep loving each other despite each other's flaws and keep their marriage covenant.  Perhaps I am getting too preachy here, but that was just really sad to find out.

But all in all, I liked the book.   It was a very fascinating account of the sinking of the Heredia with lots of background history and information interwoven throughout the book.  It was very surprising to find how much German U-boat activity was happening in the Gulf of Mexico.  I had no idea that U-boats came SO close to the U.S.!  Looking at the map just inside the front cover of the book one can get a picture of just how close they got.  Some U-boats even gave potential German saboteurs a lift to our shores!  I learned quite a bit of extra World War II history.

Many thanks to the folks at Pegasus Books for sending me a free review copy of this book (My review did not have to be favorable)!

This book may be purchased at Amazon.com and also on other retail sites