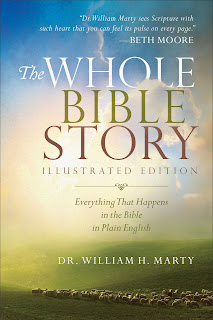 The Whole Bible Story: Everything that Happens in the Bible in Plain English by Dr. William H. Marty is a book that endeavors to give you a summarized version of the narrative history in the Bible.  The book starts from the book of Genesis and goes all the way to Paul's captivity at the end of Acts.

I didn't particularly like this book.  First of all, It isn't the whole story, it is merely a summary of the history given in the Bible.   Much, or rather most, of the recorded dialogue is missing and it is not the most accurate summary of Biblical history.  For instance, in the account of Abraham pleading with the Lord not to destroy the cities of Sodom and Gomorrah, the account omits God's graciousness in assenting to Abraham's repeated request gradually reducing the number of righteous people in the city required to spare it. It just says, "Abraham knew Lot and his family will still living in Sodom, so he pleaded with the Lord to spare at least ten people.  The Lord graciously agreed."  Abraham pleaded that the CITY would not be destroyed if ten righteous people were found in it.  There were not even ten righteous people in the city and so the Lord destroyed the city.  The book accurately goes on to point out that He spared Lot, his wife and daughters. But four people were dragged out of the city before it was destroyed, not ten.  And Lot's wife looked back and was destroyed, so that brings it down to three.  The quotation above does not give an accurate description of the dialogue between Abraham and the Lord.

As another example, in speaking of when Jesus ignored the extrabiblical restrictions the religious leaders  set up in relation to the Sabbath it says, "Because Jesus was more concerned about people than rules, he disregarded their Sabbath restrictions."  This is a grossly misleading statement. I hope that Marty didn't mean that the way it sounds.  Christ was not against rules, He was against misapplying them and misinterpreting the law of God.  If Christ were more concerned about people than about rules then nobody would be in danger of facing eternal condemnation for breaking God's law. But Christ was very concerned about rules, God's Rules.  Jesus Christ came to fulfill God's law in the way it was supposed to be fulfilled, and to show us what obeying God looks like and what God's rules mean.  Christ said, "Think not that I came to destroy the law or the prophets: I came not to destroy, but to fulfil. For verily I say unto you, Till heaven and earth pass away, one jot or one tittle shall in no wise pass away from the law, till all things be accomplished. Whosoever therefore shall break one of these least commandments, and shall teach men so, shall be called least in the kingdom of heaven: but whosoever shall do and teach them, he shall be called great in the kingdom of heaven."(Mat 5:17-19)

To add to that,  there were translations that are not accurate and misleading partial quotations.  When Christ rebukes Peter by saying, "But he turned, and said unto Peter, Get thee behind me, Satan: thou art a stumbling-block unto me: for thou mindest not the things of God, but the things of men. "(Mat 16:23 ASV)  This book changes it to, "Get away from me, Peter, ' he ordered.  'Though you don't realize it, you are setting a satanic trap for me…"  That sure takes away a lot of the seriousness and the shock of the statement.

Another part the book states, "'Of all who have ever lived, none is greater than John,' said Jesus."  And…….? They left out what He said after that! "For I say unto you, Among those that are born of women there is not a greater prophet than John the Baptist: but he that is least in the kingdom of God is greater than he."(Luk 7:28 KJV) Kind of changes the whole statement, doesn't it?

My dislike of the book began before I even read it, I looked at the back cover which says that "The events of the Bible are exiting, tender, and at times awe-inspiring, but often the story can get lost among the laws, genealogies, poetry, and instructions."  Those things are an ESSENTIAL part of the "story"!!!!  And God is the One who ordained that they be a part of His Holy book.  Who are we to consider them as being hindrances to understanding what God has given us to learn in His Word? And this overlooks the fact that learning what God says of Himself and learning His commands are just as important, if not more, than even the narrative history!

Things like the above make me strongly hesitate to recommend this book.