Amillennialism and the Age to Come - by Matt Waymeyer 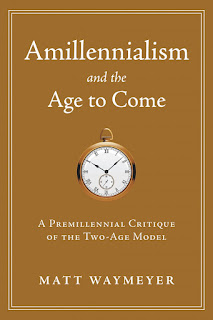 I learned a lot about Amillennialism and grew even more confident (if that's even possible) in Premillennialism.  One of the key things that seems to mark the Amillennial view is that they apparently believe that many Old Testament passages that speak of a this-earth Millennium are symbolic, not literal in their content. They believe that the New Testament is the key to understanding Old Testament prophecies in their true symbolic meaning.  In other words, you shouldn't take these passages at face value.  The New Testament (excepting Revelation) is the section of the Bible that is the literal key to the symbolic Old Testament.

He addresses many of the passages that Amillennialists think definitively rule out a 1000 year millennium  on this earth (which includes death, marriage and births happening under the earthly reign of the Messiah).  They think that these passages render it impossible.

One of their big proof texts is Matthew 12:32, "And whoever may speak a word against the Son of Man it shall be forgiven to him, but whoever may speak against the Holy Spirit, it shall not be forgiven him, neither in this age, nor in that which is coming.", they put a great emphasis upon "this age and the age to come" concept, basically saying that a this-earthly millennium would indicate that there are three ages, not two.  But Christ only spoke of two, therefore there cannot be a 1000 year Millennial Kingdom and therefore we cannot take the passages that appear to be speaking of a Millennial reign on this earth literally, they must be figurative.

One of their other texts is in Luke 20 where the Pharisees try to trick Christ with a question about marriage at the resurrection of the dead.  Part of Christ's answer is that there will be no marriage in the resurrection.  The Amillennialists believe that this rules out a Millennial Kingdom that includes people getting married and having children.  Waymeyer provides a good answer (I'll leave that for you to read when you get this book) and then in his conclusion says,: "If this were the only passage in Scripture describing the age to come one might understandably conclude that there could be no physical birth or death at any point during this time.  But with the testimony of the Old Testament prophets regarding the existence of sin, death, and procreation I the coming kingdom……..the need to harmonize the entirety of biblical teaching leads to the conclusion that Luke 20:34-36 is compatible with the millennial kingdom of premillennialism."

The only real problem I would have with this book is that Waymeyer does not address the, apparently future, sacrifices in Ezekiel (the section with the chapters in the 40s) that are described as "sin offerings". He does address the sacrifices offered at the Feast of Booths that are mentioned in Zechariah, but he doesn't address the ones in Ezekiel, which are one of the major questions even I, as a premillennialist, wonder as to how they will work out.   He doesn't even say, "I don't know what to make of them", which I would have preferred.  We don't need to know the answer to every question, but I would rather he would have addressed that section of Ezekiel even if he didn't come to a conclusion as to how they would potentially harmonize with books like Hebrews.

Assuming that these Ezekiel passages are Millennial, I don't doubt that they are perfectly compatible with the Millennial Kingdom. I just don't know how they are - this side of the Millennium.  The Premillennial view does have some questions that we do not know the exact answer to, but we know that these are paradoxes that will be explained at the time of Christ's 2nd Coming.  Just as the paradoxes of the first coming of the Messiah were cleared up at that time (how would the Messiah be a Conquering King and yet be rejected, and be pierced? Rule as King over Israel, conquering her enemies and yet be rejected and "cut off from the land of the living? ) by the realization that the Messiah would come twice.

Overall though, I think that Waymeyer does a great job in his critique.  One of the points that he thinks we should recognize is that "no single prophetic or narrative account is an exhaustive description of what has happened or will happen."  The prophecies complement and build on each other, they do not contradict each other.  And I think that that is one of the best arguments that Waymeyer makes throughout this book:  that, because of the passages that speak of a Kingdom on this earth, it is our duty to try to harmonize them with other passages that give us more information about the future, it is not our duty to allegorize them away when we are not given any prerogative to do so in the Bible.  We trust that somehow they all fit together perfectly, even if we do not see how at the moment.

I highly recommend this book, it is very well written (I read it in about two days), highly informative with intriguing and thought provoking arguments.  It has a lot of footnotes too, which I like in a work like this (especially when one spots quotes from, and references to, other books one may one to read) .  I think that it is very helpful and a great critique of the Amillennial position.

Among other places this book may be purchased at the Christian Book Distributors web site and also at Amazon.com and KressBiblical.com