Here are some samples:

To some degree the same holds true with the following:

Daniel 9:25:"Know and understand this:  From the issuing of the decree to restore and rebuild Jerusalem until Messiah the Prince will be seven weeks and 62 weeks…" HCSB 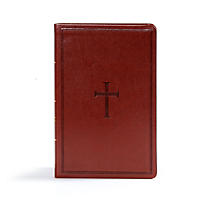 "Know and understand this:  From the issuing of the decree to restore and rebuild Jerusalem until an Anointed One, the ruler, will be seven weeks and sixty-two weeks" CSB

1 Peter 3:1-2: "In the same way, wives, submit yourselves to your own  husbands so that, even if some disobey the Christian message, they may be won over without a message by the way their wives live when they observe your pure, reverent lives." HCSB

"In the same way, wives, submit yourselves to your own husbands so that, even if some disobey the word, they may be won over without a word by the way their wives live when they observe your pure, reverent lives."  CSB

The translators also switched "languages" in 1 Corinthians 14 to "tongues", though I still think that Languages was a good translation.

There were some things that I did not like about this translation.  For instance, they seem to have caved a little bit more on the gender inclusive language - 1 John 3:17  "If anyone has this worlds goods and sees a fellow believer in need but withholds compassion from him -how does God's love reside in him?" CSB

"If anyone has this world's goods and sees his brother in need but closes his eyes to his need - how can God's love reside in him?"   HCSB  They do note that their goal is to translate the Bible faithfully, they simply change some gender specific language to gender inclusive when the text itself allows for it. I still don't think that that is necessary, but okay.

And then there is a problem that I had with the HCSB that I still have with this revision.  One of which is that, despite saying in their introduction that their "OT Textual notes show IMPORTANT differences among Hebrew (HB) manuscripts and ancient OT versions, such as the Septuagint…(emphasis mine)", they do not include the LXX variant of Psalm 40:6, Sacrifice and offering thou wouldest not; but a BODY hast thou prepared me: (Brenton- Emphasis added), Whereas the Masoretic text (which only goes back to about 900 A.D. [or CE]), the text the Majority of our Old Testaments are based on, says, Sacrifice and offering thou didst not desire; MINE EARS HAST THOU OPENED: burnt offering and sin offering hast thou not required." (KJV - emphasis added).  The difference is extremely significant as the writer of Hebrews quotation of that verse matches the Septuagint and not our Masoretic text in that it says that God prepared a body for the speaker rather than opened his ears.   And yet they include a manuscript variant of the number of the beast, 616 - which variant is quite suspect as Irenaeus (a person who lived in the earlier days of the church who is thought to have been a follower of Polycarp a follower of the Apostle John) said that this variant was false, and that the older manuscripts did not contain it nor did those who knew the Apostles support it.  If they included this variant of the number of the beast then I do not  understand how they did not give the variant of Psalm 40 which is supported by the writer of Hebrews in the Bible!

One other thing that confused me:  The CSB is presented as having been translated directly from the original languages rather than using an existing translation as its basis. There is a chart on the website for this translation showing many translations and separating them on the basis of whether or not they are translated directly from the ancient languages as opposed to using an existing English translation as the basis.  The CSB is shown to be a translation not based upon an existing translation. But to me this seems to be contradicted by the admission that the CSB is a revision of the HCSB.   That just struck me as rather deceptive.  Perhaps I simply didn't understand the chart….

Otherwise, this is quite a nice translation  Also, this Bible is very nicely bound, with a LeatherTouch cover (it feels very nice).  The text is in two columns with a center column cross reference.  There is also a concordance at the back as well as full color maps.  All in all, very nice.


Many thanks to the folks at B&H publishers for sending me a free review copy of this book (My review did not have to be favorable).

Among other websites you may purchase this Bible at Christianbook.com and on Amazon.com
Posted by Sarah L. at 4:55 PM