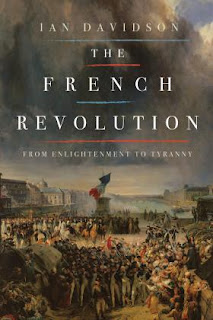 This book was quite helpful, taking you through the many events that made up that period in French history, some of these events being: a National Assembly coming into power subordinating the King to a Constitution, France going to war with Austria, the King being condemned to death and executed, various uprisings of the people, the Terror, many public beheadings (apparently so common that they became boring) and the ultimate execution of Robespierre himself.

I learned that the Revolution did not start with the people wanting the King overthrown (I guess I sort of assumed that they were all for Regicide), the move was made at first to keep the King but subordinate him to a Constitution. He would no longer be the ultimate authority, rather there would be a National Assembly which would have the power to vote on things - I think the King was given some sort of veto power, but that didn't last long.   Even after the  monarchy was completely removed not all Frenchmen wanted the former King executed (the lack of that desire caused trouble for them later on), but they were overruled.

Robespierre eventually comes into power and the Terror begins, and it truly sounds as though it would have been quite terrifying.  Ultimately it came down to utter lawlessness,  if one was accused of being against the government, you didn't even need proof of guilt.  It was basically a matter of one's being presumed guilty simply because one was accused.  ""the tribunal could only choose between two verdicts, acquittal or death, and that based not on evidence but on the moral conviction of the jurors."  Ironically, Thomas Paine was supposed to be executed (due to various events) but was saved by a mistake.  Davidson does not focus on the Terror part of the history (It only takes up about one chapter), the Terror was simply one part of the whole Revolution…or 'revolutions' of power in France, and it actually didn't last as long as I had presumed.

The history in and of itself is a bit overwhelming as there are so many changes of power, various political inclinations of the characters involved, and many constitutions and other political documents produced, but the author of this history does a pretty good job of talking you through what was happening.  it's still hard for me to keep track of all that happened in retrospect, but that's where the timeline at the beginning of the book comes in handy.

I want write a few notes here, about the book, first, there is an awkward discussion in one of the notes at the end of the book, that I don't quite see as relevant to the history - or at least is not something that I felt the need to know. And also there are pictures in the middle of the book, two of which (paintings) are not decent (some nudity).

On another note, there were  several helpful maps included in the book, a timeline and also an interesting list, compiled by Davidson, of people of note in the revolution. His list "suggests" that "anyone who did anything in the Revolution that could come to the attention of later historians had a 43 percent chance of a violent death".

One of the things that I found striking about the French Revolution, as opposed to the American one, is that it appears that it was quite atheistic in its endeavors.  Robespierre tried to remedy this by coming up with something called the Supreme Being, but even then, Robespierre seemed to consider himself the supreme being rather than any supernatural entity. That seems to be the 'thing' about the French revolutionary leaders: they were themselves the moral reference rather than anything outside of themselves - which is perhaps why events were so mixed up,  because the people, with their varying opinions, were themselves the standard rather than any fixed point.  They really were not governed by any fixed law, rather it was the laws made up by whoever was in power at the time.  The people governed the law rather than vice-versa.

Davidson is an interesting writer, he keeps the attention quite well and is not afraid to give his own opinions and speculations on the various events of the Revolution. I didn't necessarily agree with all of his opinions of the events he is recounting, but it was interesting to see what he thought.  Before I read this book, I mainly thought of the French Revolution  as a chaotic, murderous, disorganized attempt at mimicking the American one.   In a way that is true (at least in my opinion), but it was more organized than I thought, though there were many conflicts as to how it should be organized (thus multiple constitutions and changes of power), it was, perhaps, a little less murderous than I thought, though it still struck me as rather violent during pretty much every stage, and it wasn't quite as chaotic as I had thought, at the beginning, though it still seemed to get more and more chaotic as the Revolution progressed.

All in all, it was quite the fascinating read.

Many Thanks to the folks at Pegasus Books for sending me a free review copy of this book!  - My review did not have  to be positive

Here are a couple (there are more of course) of websites where this book may be purchased:  Amazon and Barnes and Noble