The Art of Beatrix Potter 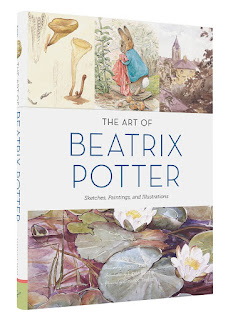 The Art of Beatrix Potter is a very nice collection of her art.  It is quite a large book, rather like one for the coffee table.  Divided into five sections, each section deals with significant places where much of her art was produced and inspired. It gives you a pretty good idea of her life by means of commentary on her art and  of photographs that were taken of her, her family and various places where she lived and visited.

I'll mention right away that it seemed a bit disjointed.  It didn't quite seem to follow much of a sequential order, it just sort of bounced around the timeline of Potter's life.  But the point of the book isn't to give you a biography of Potter, but to introduce you to her artistic skill, and I believe it does a good job in this.

There are drawings and paintings of landscapes, of houses,  rooms inside of houses, and of various creatures, many of which were studied by her for her children's books: rabbits, frogs, ladybirds (or as we Americans call them, ladybugs), squirrels….etc.  There are also photographs, or scans, of the covers of many of her children's books, and some history behind the various ones as well.  There are also pictures of some sections of the letters to children that many of her stories originated from.

Potter had some unusual subjects that she did as well (at least to me!) such as paintings of fossils and also paintings of various fungi, which becomes, after the first two or three, rather boring, but her artistic skill is still quite intriguing to observe, despite the subjects.

There were several interesting tidbits about Potter, for instance:  She admitted to being quite unoriginal in her artwork, she copied nature as it was, she didn't imagine a completely original scene, preferring to use what was in front of her rather than imagining something completely different. But she would change scenery, mixing different aspects of multiple places that she had copied together to make one picture.  She would copy gardens and rooms inside of houses, and would travel around to various places finding scenery to paint that would potentially make good backgrounds for her characters in her various books.  Her animal characters were often modeled by her own pets (including the hedgehog that became Mrs. Tiggy-Winkle).

Another thing about Potter that I learned(this surprised me as I would never have thought it of her) , has to do with the pictures of fungus that I mentioned earlier;  she was apparently very interested in fungus! She studied it during her younger years, and loved painting it.

Overall I think that this is a nice collection for Potter fans, and that people will enjoy the history and the pictures.  It inspires me to take a closer look at God's creation and realize how marvelous it all is, and how great the One who created it is!

I received a free copy of this book as a part of the Library Thing Early Reviewers Program:  Many thanks! (My review did not have to be favorable)

One of the places where this book may be purchased is at Amazon.com
Posted by Sarah L. at 12:12 PM