When a Nation Forgets God - By Erwin Lutzer 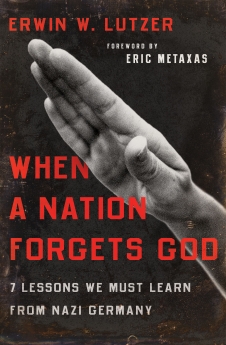 When a Nation Forgets God: 7 Lessons We Must Learn From Nazi Germany by Erwin Lutzer, compares the things that started Germany on the path to becoming Nazi Germany to things that are happening in America.  The path that Germany took  turns  out to be eerily similar to the one America is taking.

The Germans wanted a political savior.  Along came Hitler to fix the economy, take care of their children, and protect them from  dangerous things and people(which in their view included Jews). They wanted someone who would make them feel patriotic again and proud of their country rather than humiliated as they felt after World War one.  Hitler came along and did just that.

Many Christian went right along with it, and patriotism began to be substituted for Christianity, especially as Hitler couched patriotism in a Christian light.  There was "positive Christianity" and a movement called, "God believers" where people could find that the state could be a good substitute for the church in many (or all) aspects of life.

I think that the parallels between the Germany of the 1930s-40s and America today are fascinating and instructive, and that we truly can learn lessons from the past.  I just have a bit of a problem with Lutzer saying that, "We need to develop a 'theology of civil disobedience' ; that is, we need to think through this question:  When do we tolerate the curtailment of our freedoms and at what point should we speak and act? "  To me that statement seems along the lines of saying that wives need to develop a "theology of disobedience to husbands", or saying that children need to develop a "theology of disobedience to parents".  I wish that Lutzer had worded that differently.  Though I agree, of course, that there is a place for disobeying government if that government tells us to deny Christ, worship other gods, or have abortions to control the numbers of the population…etc.  these things go against God's Word.

Also, Lutzer seems to view Dietrich Bonhoeffer as a martyr for the cause of Christianity. Though I do believe he was a Christian, I do not see historical evidence that he was killed because he was a Christian.  Lutzer himself says that Bonhoeffer would, "eventually become a martyr for his part in a conspiracy to assassinate Hitler."  I do not know if one can make a legitimate biblical case for assassinating a leader whom God has put over you.  We need to remember that Nero (who was a pretty horrible and murderous man) was in charge when Paul wrote, "Let everyone be subject to the governing authorities, for there is no authority except that which God has established. The authorities that exist have been established by God." (Romans 13:1).  We know that this does not mean that we obey them when they go against God's law, but I do not see that we can gain a biblical validation for making the murder of any political governor whom God has placed over us into a Christian act- no matter how bad the man is.  This is probably not the idea that Lutzer meant to convey, I just felt as though I needed to address it.

Anyway, I do think that this is an interesting book overall, and I especially like how Lutzer points out that we do not need to "win" the ideological battles with our culture (thought we certainly do try), our homeland isn't here anyway. God's ultimate rule and victory is sure, though we need not see it now.  We need to stand firm and obey God rather than man if man tells us to disobey God.

To me this book seemed like an abridgment of Lutzer's other book, "Hitler's Cross", which I liked quite well.  I would recommend reading that book if you would like a fuller look into the Nazi Germany and modern America comparison, especially in its dealing in more detail with how corrupt churches became in Nazi Germany and how politicized, eventually losing any of the true Christianity they ever exhibited.

Many thanks to the folks at Moody Publishers for sending me a free review copy of this book (My review did not have to be favorable).

A couple of the websites (there are more of course) where you may purchase this book are christianbook.com and Amazon.com