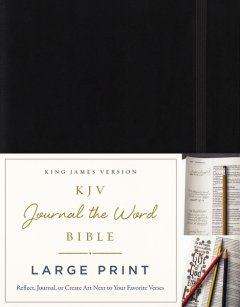 The KJV Journal the Word Bible (Large Print) is a Bible designed for those who like to write notes in their Bibles.  The text is laid out in one column on each page and next to the column of text is a ruled margin for writing  (or as is also advertised: for creating art - but I don't necessarily recommend that).

The paper is very easy to write on with pen and pencil (I like how the pen just glides along the page).  The Bible when opened really does lay quite flat, which also helps in writing neatly.  It would be useful in writing particular exegetical comments down, noting insights from your pastor and perhaps noting other translations of particular verses.  I don't think that there is enough room to write notes on each verse on any given page,  but one normally doesn't write a lot when noting things in a regular Bible, just the things that really capture our attention and that we want to remember to associate with the text.

I kind of wish that they would have put the writing space at the bottom of the page (as study Bibles do with commentary) instead of next to the Biblical text.  It would help with organization: one could just write a tiny number next to whatever verse a particular note pertains to and place the same number next to the handwritten commentary below for reference sake.  It  wouldn't be quite as distracting as having one's own notes right next to the text that do not necessarily pertain to the verses one is reading at the moment (as one's notes can take several lines down the side of the page and thus seem to encompass several verses).

But I still think that this is a pretty handy Bible to have if you like taking notes in your Bible already, and you could just do the drawing arrows to the verse method of pointing out which particular verse you are commenting on. Or I suppose the numbers reference method might still work in this format as well.

The version I have is a hardcover, but there are several other editions as well (including leather), and also other translations.

I received a free review copy of this book from The BookLook Bloggers Program (My review did not have to be favorable).

A couple  (of the many) websites where you may purchase this Bible are Amazon.com and Christianbook.com
Posted by Sarah L. at 1:53 PM