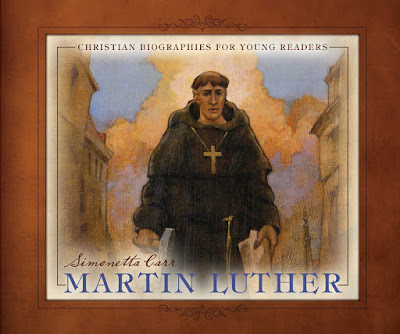 Martin Luther by Simonetta Carr is a nice overview of the life of Luther for children.   It starts with Luther's birth and moves on through his life as a child in schooling and then on to his college days, where the thunderstorm happens that scares him into a monastic life where perhaps he could earn his way to Heaven.  As a Monk we learn that Luther was very meticulous and very much into examining his own thoughts and motives for sin; his ritualistic confession of his sins grew so frequent (sometimes happening just moments after he had  confessed other sins) that it irritated his superiors who then "told him to confess only big sins."

Luther ultimately is promoted to higher positions, moving on to the city of Wittenberg to be a professor of Bible studies. Ultimately he also ends up preaching in the city church as well as "supervising ten monasteries".  Tetzel comes into Germany with his indulgences and as a consequence Luther writes his "ninety-five questions" (I like how Carr simplifies much of the language for children). He simply wanted to discuss them on a scholarly level, but they end up being translated into the common language of the people and causing a big stir in the nation and around Europe.   And then of course the famous 'Diet of Worms" happens, Luther gets taken away to a Castle…etc. Ultimately Luther ends up marrying and having several children.  We see how generous Luther and his wife are, they help many people during hard times. They also go through hard times themselves, losing some of their children in death, but they still trust God.  The book comes to a close with Luther's death followed by a quick summary of his influence.

There are pictures scattered around the book: old and new paintings and drawings of Luther in various events God ordained that he would go through.  There are also pictures of some of his relatives and other historical people mentioned in this book.  Also included throughout the book are photographs and old drawings of the various towns and buildings Luther frequented, as well as a few photographs of objects, such as a lute and a chest used to "collect money from the sale of indulgences".

Carr writes in a way that I think children will easily understand and also manages to simplify  explanations of erroneous beliefs of the day as well as important Biblical concepts. As Examples, Carr talks about people thinking that they could earn their salvation or the salvation of others, and that many believed that Christ and God were both angry judges of sinners to be appeased by 'saints' (described as "godly people who had died") .  She also conveys Luther's struggle with what "the righteousness of God" (as discussed in the book of Romans) actually means and his final realization that in this verse (Rom 1:17), "this is not a righteousness God demands,  but a righteousness God gives in Jesus Christ."

At the end of the book there is a Did  You Know? section and after that a selection of excerpts from Luther's small catechism. I found the "did  you know" section especially interesting. I did not know (or at least I didn't remember) that Luther's last name at birth was actually Luder but he changed the spelling to Luther, "as a wordplay on the Greek eleutherius, which means "free man".  I think that kids (and adults) will both enjoy that section as a potential discussion prompting conclusion to the book.

All in all, I really liked this book.  I really appreciated that she does not make Luther come across as a hero to be worshiped but rather as a man, saved by God's grace and not his own merit, who was used by God to bring people to a correct knowledge of the Gospel and to point them to the Word of God as the only authority.

Two of the websites (among others) where you may buy this book are at the Christian Book Distributors site and Amazon.com