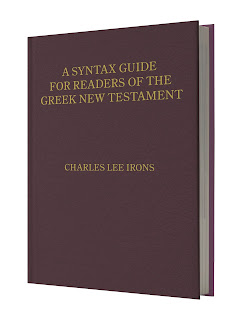 A Syntax Guide For Readers of the New Testament by Charles Lee Irons is a nice addition to one's NT Greek tools library.  It is not a stand-alone tool, but meant to be used with  other lexical aids.  Irons notes that, "This Syntax Guide does not duplicate the help provided by such tools.  Rather, it picks up where these other tools leave off" and "presupposes their use…"   The introduction explains that in this guide, "select cases, glosses and parsing are not the focus".  Rather, in some places it gives specific explanations of "syntactical, clause-level features".

There is a chapter for each book of the New Testament, and each book is divided into chapters and each chapter has a list of select verse references from that chapter and next to the reference there may be  a section of the Greek wording of the verse and some comments .   Some of the verses only have a brief suggested translation without any grammatical comments, I give an example below:

(Note:  I've attempted - probably not very well - to transliterate the Greek words which are actually presented in Greek font in this book)

And other verses are dealt with more in depth:

"4:23 [erketai hora kai nun estin = 'an hour is coming and is now here,' erketai  is ingressive-futuristic present (W 537) ]  kai gar = 'for indeed' ] ha patair toioutous zatei tous proskunountas auton = 'the father is seeking such people to worship him' (ESV), 'the Father wants people of this kind as his worshipers' (ZG)"

At first I was a bit disappointed that it is not more detailed, and still am.  But again, as the intro explains, this guide is not meant to be a stand-alone resource, but rather used along with a parsing guide or other similar tools.  Irons wants to encourage people to read the Greek NT as a whole instead of merely tiny portions of it, and created this tool with that idea in mind.  In this book Irons tries to eliminate the "need to stop and look up intermediate, advanced or unusual grammatical features of the Greek text".  Irons believes that a very good way to truly learn NT Greek is to familiarize oneself with the text by reading through large portions of it or preferably the whole NT.

I think that that is a good idea and it makes sense, that simply reading through the Greek New Testament will  build up one's skill in a more natural way than just memorizing individual Greek words and tenses, verb forms..etc.  Even having to look things up in a parsing guide and a syntax guide almost every step of the way will build one's knowledge over time.

At the end of the book is an index of subjects where you may look up many of the verses (it's not exhaustive) by their grammatical form, for instance, under "ACCUSATIVE" you may look up verses that are "adverbial accusative",  or under "NOMINATIVE" you may look up verses under the section "qualitative predicate nominative". You may find  the adjectival genitive section, or pluperfect periphrasitic - (I'm still only a beginner in Koine Greek so at the moment many of those terms don't make any sense yet…).  There is also section in the index that lists verses that have "Septuagintisms" - which I find interesting as I have been doing some study on the Septuagint, its history and its quotation in the NT.

It is an interesting and handy work for students of Greek who wish to start building up their ability to easily read and comprehend Koine Grk.

Many thanks to the folks at Kregel Academic for sending me a free review copy of this book!  (My review did not have to be favorable)

Among other places this book may be purchased at Amazon and at the Christian Book Distributors Website
Posted by Sarah L. at 1:13 PM