I am disappointed with many of the 'study' Bibles of our day but the Apply the Word Study Bible is quite refreshing in its commitment to prompting one think to about the text one is studying.  he Bible has many "application notes" and also includes maps,  charts and little character profile boxes throughout.    It really is more of an application type of study Bible, not a linguistic study Bible but the application used seems to be mostly exegetically based.

I think that the application notes are quite good, none of them really seem forced onto any text they're commenting on, even the ones found throughout the books of the law, and prophets, are quite good and don't seem as though someone was grasping at straws (as some study Bibles seem to do) to find an application of those seemingly tedious parts of Scripture and so they come up with some  eisegetical way to get some personal-meaning out of them.

For example, toward middle of Ezekiel one of the application notes reads:
"…when the show was over, so was the people's interest.  They heard Ezekiel's words but did nothing to put them into action.  They enjoyed the presentation but ignored the message…Their curiosity about Ezekiel's sermons did not change their lives.   When faith becomes more about entertainment than genuine commitment, we become spectators rather than players, concerned more with What is the latest word from God?  Than What am I going to do with what God has said? …Self-deception is the worst thing about a faith that exalts entertainment.  True conversion and true obedience involve not just expanded knowledge about spiritual things or good feelings toward God, but changed purposes, commitments, and actions."

Some of the application notes are quite strikingly insightful, In Luke 18, where the blind man begs Christ to have mercy on him there is a note entitles "Holy Interruptions", part of which reads: "Jesus didn't treat these interruptions like intrusions, He let needy people elbow into His life, even when His closest ffriends tried to block their way.  In fact, one could argue that Jesus did much of His work during moments of interruption.  We often grown annoyed at disruptions, feeling as if life has been put on hold.  When are we missing out on some of life's holiest moments?" Though I have heard of similar concepts/teachings about 'holy interruptions',  I had never noticed their significance in Christ's life before and His handling of them.

There were some problems that I had with it though, for instance, some references that were made to specific times when Christians "enter into the presence of God" which concept really seems to discount His omnipresence and His promise never to leave us or forsake us.    I also don't like that some of the notes call the land of Israel 'Palestine', I thought that the land did not become 'Palestine' until Hadrian's day, not to mention that in our day it’s basic area is the state of Israel.  I didn't understand why they didn't call that present day land area 'Israel'.

And then there were some things that seemed laughably odd to me (though they didn't mean them to be),  three samples of which I'll give here. First:  in the intro to each book of the Bible there are lists of key people in that book and key events..etc.  Among the key people of 1st Chronicles is "Sheerah, an Ephraimite woman who built three cities".  Umm…that just seems odd to me as, though she is mentioned, she hardly seems "key" to the account of book of 1st Chronicles. Second: In a chart comparing Joshua and Paul entitled "Profiles of Leadership" the two men are compared to each other, and in the section "Early indications of leadership potential" one of Paul's early leadership displays was  that he "Aggressively tried to stamp out Christianity"?  That just seemed too odd of an example  in my opinion.  And the last that I'll mention is the notes on Matthew 13 where Christ tells some parables, here is a tiny excerpt from the notes, "Jesus captivated listeners by putting spiritual truths into everyday terms they could understand.…His images and language brought His message to life for ordinary people."  But if the author of those notes would have just read vs. 10-17 of that very chapter they would realize that they are contradicting what Jesus said, when the disciples asked Him why He spoke in parables He said that He spoke in parables so that the people WOULD NOT UNDERSTAND!!  Even the disciples did not understand until Christ explained the parables to them.

But, excepting all of the above and some other things, I was pleasantly surprised at the format and study content of this study Bible.  I have read too many Christian books and even, if I remember correctly, study Bible notes that seem too, for lack of a better term, "lovey-dovey", too "God is in love with YOU!", too uncomfortably and almost irreverentially romantic.  This study Bible is refreshingly un-overly-sentimental…if that makes any sense.

This Bible may be purchased at (among other places) CBD and Amazon.com
Posted by Sarah L. at 8:02 PM No comments: 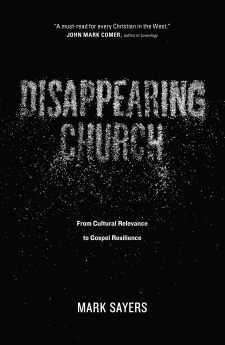 Disappearing Church by Mark Sayers posits an interesting thought:  We live in a culture riddled with "liberal Christian residue", our seemingly secular culture is basically Christian liberalism without the label of 'Christian' and without being considered 'religious' .  By trying to be relevant by trying to appeal to the ever-changing culture around them liberal Christianity became so relevant that it's basic tenets became a part of the culture and thus the church 'institution' was irrelevant as the culture had already been won.  Sayers illustrates it in this way, "" Like a team of suicide bombers who obliterate themselves yet irrevocably change the cultural atmosphere, liberal Christianity has essentially destroyed itself as an ecclesiological, institutional force,  yet won the culture over to its vision of a Christianity reshaped for contemporary tastes."

The author explains that the modern 'church' has imbibed and taught a contemporary form of Gnosticism (his chart comparing ancient and contemporary Gnosticism to the Gospel is very interesting), "This new religion could be detected in an increasing obsession with the self, with personal development and the preference of spirituality over religion, and with therapy over communion with a transcendent God."  The discovery of self is the religion of the day, even in many Christian churches the goal is self-satisfaction, self-fulfillment, self-discovery, a follow your heart mentality…etc.  Sayers points out that it is no wonder people can leave church so easily without even finding another one as they can get the same teachings from the world. The book brings to light the idea of our day and age that personal spirituality is better and more holy than organized 'religion'.

Though I thought that Sayers insights into our modern culture were fascinating I do have some misgivings about the book. Sayers  says some things that imply to me that he may consider Roman Catholicism a legitimate/biblical type of Christianity, and thus the people who hold those doctrines are Christians, that concerns me.  He uses movie illustrations that I think were rather unnecessary and I didn't quite get what he meant by using the statement, "withdraw/return"…it's probably just me.

Overall though it was rather interesting, though I think it could have been better…it just seemed as though there was something missing, though I'm not sure what at the moment.  But again, it is a very interesting insight into the 'disappearing' institutional church of our day and is quite thought provoking.  I'll end, as I usually do,  with one of  my favorite quotes from the book:

"As Rolheiser comments, 'Our age tends to divorce spirituality from ecclesiology.  We want God, but we don't want church.'  However, the great flaw of our search for spirituality and faith  minus church is 'the unconfronted life.  Without church, we have more private fantasy than real faith….Real conversion demands that eventually its recipient be involved in both the muck and the grace of actual church life.'  More than ever we need the limitations and glorious messiness of church…The mere fact that God chooses it, in the same way that He chooses us, humble vessels, is part of His grace that fools the wisdom of the world."

A couple of the places (among others) where you may purchase this book is at Amazon.com and also at Christian Book Distributors
Posted by Sarah L. at 3:34 PM 1 comment: