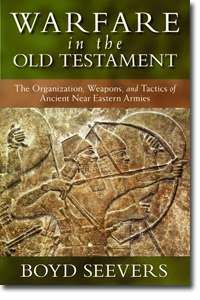 When I read about the battles that take place in the Bible,  I have a vague picture in my mind of two generic groups of ancient soldiers fighting, nothing really specific about their attire, weapons or fighting methods. This is may be the case with most people. In Warfare in the Old Testament, Boyd Seevers sets out to give us a more detailed picture of what these clashes may have looked like.


The organization, weapons and tactics of the nation of Israel are described first, "Typically, one finds good military records from nations only after they attained great strength.  Surprisingly, some of the best information from Israel comes from when it was struggling for birth and survival." Then in the subsequent chapters Seevers describes the enemies of Israel namely, Egypt, Philistia, Assyria, Babylon and then Persia.  He introduces each nation with a short fictionalized account of a soldier in each particular army, his thoughts, worries and considerations of the particular army he and his nation are up against, and then stops the story and moves on to particulars in regards to the nation's history, strategy and weapons. I thought that that was an interesting way to do it.
One of the things that specifically grabbed my attention was in the chapters on the Assyrians.  I had never really considered the idea that Israelite exiles might have served in their captors' armies.  The fictional short story at the beginning of the first chapter on the Assyrians deals with an exiled Jew from Samaria, who served in the Assyrian Army.  It seems that there actually was a unit in the Assyrian army, made of Jews, which was a known as the 'Samarians'.  "No other unit bore the name of a city or nation, especially from a conquered region."
It was also interesting to learn more about the Philistines, where they may have come from, and how they came to be in the same general territory as Israel.  In the account of the Persians, the attack by Cyrus upon Babylon would particularly informative while reading along with Daniel 5. Belshazzar is warned that God was bringing his kingdom to an end, and then it says that he was slain in the night. If you have information of the account of the invasion, you can think that while Daniel was interpreting the writing on the wall to the King, outside of Babylon the enemy already had a strategy for breaking in, having drained, or getting ready to drain the river so that they could wade into the city.
This book is filled with maps of the various nations discussed, and illustrations of soldiers and weapons taken from actual archeological finds from the various eras.  There were only a couple that I found unnecessary, picturing stripped soldiers who were taken prisoner. I don't think they were very detailed.
Now, I didn't like  that Seevers described certain information in the Bible as being "frustratingly unclear".  Particular information not given in the Bible is information we do not absolutely need, otherwise God would have made it more clear.  But it is nice to get to know some of it.
Overall, though I did not find any of the information absolutely necessary, I liked this book.
Thanks to Kregel  Academic for sending me a free review copy of this book!(My review did not have to be favorable)
This book may be purchased at the Kregel Academic website, or on Amazon.
Posted by Sarah L. at 2:23 PM