Did you know that Muslims believe in the virgin birth of Jesus?  Did you know that the Qur'an teaches that Christians believe that God is three gods forming a trinity made up of a father, son(Jesus) and surprisingly, Mary.  These and other interesting facts are brought out in this educational critique of the Qur'an by James White. The history of the Muhammad and the Qur'an are both given as far as possible from historical/traditional accounts. What the Qur'an teaches about Jesus is examined, as also are so-called 'proofs' that the Christian Bible foretold of Muhammad's coming and status as prophet.  White shows that their own document does not stand against some of their tests for the holiness of the Christian Bible. 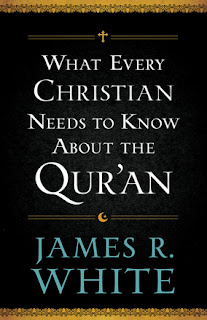 It was very interesting to find that Muhammad apparently did not know exactly what the New and Old Testaments actually said when he wrote the Qur'an.  He seems to have gotten his information on the Torah and Gospels from hearsay and observation of 'churches' rather than from the documents themselves.  It was particularly fascinating to see learn that although Jesus is viewed as a great prophet, and apparently a sinless one as well, Mohammad is the greater prophet, despite having sinned and been forgiven by Allah.


I would disagree somewhat with White's declaration that the best way to share the Gospel and honor truth is to enter into another's worldview and their theology.  I do not need to know or understand a person's false notions about baking cookies in order to teach them how to make them correctly. I just need to know the right way to make cookies. When God sent Phillip to the Ethiopian Eunuch, Philip did not have to enter into the man's worldview or theology to get him to want to talk about the Gospel.  Perhaps I am too critical, but I just feel as though I need to mention these things. I am not discounting the helpfulness and at times the necessity of understanding worldviews or theologies, I believe that a biblical case may be made for that also. I simply do not think that it is imperative to do so since the Gospel is the power of God to salvation, not logical demolition of worldviews. Apologetics may lead to presenting the Gospel but the apology is not the Gospel itself, which is affirmative.  So do I think that every Christian needs to know these things about the Qur'an?  No.


But I really liked this book, this information would be very helpful to have when God brings along opportunities for us to share the Gospel with Muslims.  Let me end with a point that White makes in response to a Muslim Criticism of Christianity, it struck me funny:  "Islamic apologists make much of the so-called 'Synoptic Problem' in the New Testament studies.  When you study the synoptic Gospels(Mathew, Mark, and Luke)…… you discern differences between them.  Which makes sense - what would be the purpose for three carbon-copy gospels?"
Thanks to Bethany House for sending me a free review copy of this book(My review did not have to be favorable)
Posted by Sarah L. at 8:43 AM