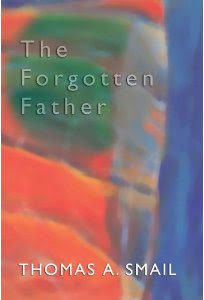 Recently there seems to have been a trend towards a Christocentric hermeneutic, and  an overall focus on Christ altogether in Christian circles.  It has been frustrating to see, as the focus of the Bible is not on Christ, but on the Father.  Christ Himself points to the Father!   When I saw the title of this book, it intrigued me…that's exactly what I and my dad(a pastor) have been talking about: people forgetting about God the Father.  As Mr. Smail writes, "God the Father "has been regularly and ritually confessed, but his being and work as Father has been out of the centre of concern.  It is of course true that in recent years there has been a great deal of concentration on God.  It has, however, been a mainly apologetic concern, about the basis, possibility and meaning of speaking about God at all, rather than a properly dogmatic discussion with in the Christian family on the basis of shared faith about the nature and character of the God who in Christ has revealed himself to his people as Father, as well as Son and spirit.  The question about God that people have been asking has been whether he exists rather than who he is. "

This Christocentric focus, or even Pneumacentric focus is evidenced in who people are praying to,  again, quoting Mr. Smail:  "There is a type of protestant prayer that concentrates in an unhealthy way on Jesus, and that can easily become familiar and sentimental, because it has forgotten who Jesus is - the only Son of and the only way to the Father.  There is a Jesuology that can lavish an all too human love on an all too human Jesus and banish God to such remote transcendence, that we are back with the idea that we have to cling to a loving Jesus to keep us  right with a remote and probably angry God.  There is equally a prayer that concentrates on the Holy Spirit and the gifts and blessings he can bestow in a way that forgets that these things matter only when we use them to witness to the Son and to serve the Father in amore effective obedience.  To pray TO Jesus rather than THROUGH him, TO the Spirit rather than IN him, as the established habit of our prayer, is to betray a doubt about our relationship to the Father."

Smail does a good job at addressing this issue, reminding us that the Spirit points us to Christ, and Christ opens the way for us to know the Father, to directly know the Father.  Again, pulling up some of the author's statements on prayer, "Prayer is through Christ….in John 16…'I do not say I will ask the Father on your behalf.'  He will not go instead of us, we are to come ourselves because the way is open.  Yet it is immediately clear that our ability to do so is entirely dependent on Christ and our relationship to him.  We do not come by ourselves, but it is we ourselves who come through him.  The same idea of mediation is implied in Hebrews 4:16.  Because he has gone into the holiest of all as High Priest we can
'approach the throne of grace with confidence'…….It was into all this that Christ initiated his disciples when he said, 'When you pray, say Abba,'…" Christ's death did not just save us spiritually, it gives us access to the Father!

He makes the case that you don't know the true God if you do not believe in the Deity of Christ, you do not know the true Gospel if you do not believe in the Trinity.  Knowing about the trinity, the relationship of the Father, Son and Holy Ghost  is important.  He asks, "what is the significance, status and nature of the Father/Son relationship? Is it the MEANS of revelation and salvation or, more than that, is it the CONTENT of revelation and salvation?.......The doctrine of the Trinity does not lay an irreverent philosophical mystery on top of a simple scriptural gospel; it simply makes explicit what is implicit in the biblical gospel…….How can the act of atonement on the cross be reconciling, effective, creative and of universal importance for all men, unless the agent of it is himself God?.....It takes the Trinity to make sense of the atonement…….The cross is atoning and saving precisely because on it God offers to God the obedience that is appropriate to us……"  And then… "In the new Testament, as understood in the mainstream of Christian tradition, we meet the same God three times.  First of all we meet him in the Father, whom Jesus prayed to and obeyed, at whose bidding he came, lived, suffered and died, by whose hand he was raised from the dead.  But in Jesus Christ himself, we encounter the same divine love and power appearing personally among us as our fellowman.  God is now not only exalted in heaven but made man on earth.  The acts of Jesus are the acts of God, the words of Jesus are the words of God, the suffering of Jesus is the self-sacrifice of God, the person of Jesus is the person of God, so that the confession of the Church echoes the confession of Thomas (John 20:28) and addresses not the Father in heaven but the risen human Jesus, 'My Lord and my God'.  But with Jesus ascended there comes according to his promise allos Parakletos, 'Another of the same kind of Advocate Counselor.'  The Holy Spirit who keeps on relating Christians to Christ and the Father, and then to one another, is himself God, God at work in and among men.  He does not hand us over to another, but in this other he keeps on coming to us himself."

He doesn't focus on the Christocentric Hermeneutics issue, but he didn't need as his biblically based plea for us to learn more about the Father deals with the issue itself.   All in all he does a good job.   It might surprise you, as it surprised me, to learn that Mr. Smail is a charismatic.  His leanings show up more towards the end of the book, so be watching out for that.  But even his this is not so 'bad', as he is critical of the movement, desiring it to focused on the Father, not on the Spirit, to be biblical rather than emotionally/needs based(focused on miracles, speaking in tongues).   Speaking of which he says, "If the charismatic renewal is to continue and deepen... It must cease to fabricate a distorted Christ who says, 'Come and I will give you whatever you want,' and face up to the real Christ who says, 'Come and I will send you wherever I choose.'"  And again, "There are those who think that renewal has nothing to do with theology and will find too much theology in this book.  They have to learn that there is no such thing as a renewal without a theology but only a renewal with a bad theology or a renewal with a good one.  I have tried to suggest that the right theology for renewal is not a testimony-based teaching about experiences and gifts, but the classical Trinitarian theology that has its roots in the New Testament and that centre in the incarnation, death and resurrection of the only Son the Father as the focal point of all creation and recreation……"

Sorry this review is so long, but I wanted to give you more of an idea of what this book is about, as the main thing that I had to go off of was the Title(I asked for it for Christmas), so I'm trying to give others a bit more to go off of.

I'll end with one of my favorite quotes from the book, which is also a good summary of it:  ""…we have had in recent years a Jesus movement and a charismatic movement.  The one has almost disappeared and the other is threatening to run out of steam, perhaps because each is in a different way inadequate to the gospel, which his basically a Father movement.   It is not first a Jesuology (a doctrine about Jesus) or a pneumatology (a doctrine about the Spirit) but it is a theology or even a patrology - a doctrine about God the Father.  It starts not with the cross of Jesus or with the gift of the Spirit, but with the Father who so loved the World that he gave his Son in his Spirit."