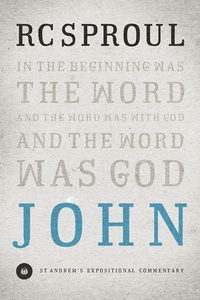 Some commentaries are nice to have merely for referencing and some are good for reading all the way through. This book is one of the latter.  It is well written, or perhaps I should I say,' adapted' as this book is to some degree a compilation of Dr. Sproul's sermons on John.

I like that Sproul is not afraid to say when he is unsure what a text means.  He'll give you the differing views about the passage, tell you his opinion but will make sure to clarify when he isn't certain that his opinion is correct.  He is also very enthusiastic about what the Bible says, He is excited about it, and is good at communicating that excitement.  When Sproul reaches the verse where Christ says, "Nevertheless I tell you the truth.  It is to your advantage that I go away; for if I do not go away, the Helper will not come to you; but if I depart, I will send Him to you." he comments  "The first time I really grasped the implication of this text, I literally began to dance in the street and jump over fire hydrants.  I said:  'Eureka!  I can't believe it! All this time I have felt like Abraham, living in the Old Testament, looking forward to the time of Christ's coming, or wishing that I could have been alive during Jesus' earthly ministry, because those people heard and saw Him and His miracles. If only I could have been an earthly eyewitness disciple of Jesus, my Christian life would be so much better than it now is.'  Yet our Lord said our situation now is better than that of HIs disciples when He was walking on the earth."

He generally sticks to studying out what the  texts actually say rather than reading into the text.  In one place in the commentary he comments:  ""I'm sure you've seen the popular bumper sticker that says, 'God said it; I believe it; that settles it.  'It doesn't matter whether I believe it. It's settled long before my assent.  If God Almighty opens His holy mouth and declares something, we don't need another witness.  It's  over.  It's settled." And then again, "We should be careful about speculation.  As John Calvin said in his commentary on Romans, when God closes His holy mouth, we should desist from inquiry."  He has some very good applications to our own day as well, such as his observing that in our time we have a 'practical Unitarianism', in that we focus too much on the Holy Spirit, for the most part excluding the Father and Son.

Now, I need to mention that I disagree with his view of Christ, and subsequently the church, as the 'true Israel'.  I believe, and I see this as biblically, that one must be a part of the physical  race of Israel in order for one to be a part of Israel.  Christ certainly was a part of Israel, and certainly the ultimate 'Israelite'.  But this does not make Christian Gentiles spiritual 'Israel'.  Romans 9-11 is very clear that 'Israel' is still made up of those descended from Jacob(as is Jeremiah 31:35-37), and that God is not done with this race. Let me clarify that the Jews will be saved the same way as Gentile Christians are saved, by Christ's atoning work on the cross and his regeneration and sanctification of them.    The 'Israel of God' is elect Jews, not elect Gentiles and Jews. And the Jews have material things promised to them when they are a righteous people (which will happen by Christ's righteousness)that were not promised to righteous Gentiles.   But, this is not the place for me to expound on this.

All in all, this commentary is very interesting, and good.  Let me end this review with two of my favorite quotes:  "Suddenly the words 'born- again' became a part of the nomenclature of American culture.  Many people began to call themselves 'born-again Christians.' That term, however, is a kind of stuttering, because 'born-again Christian' is really a redundancy. It's like speaking about 'an unmarried bachelor' or 'a three-sided triangle.'" and "The saints, the holy ones, those called out from the world assemble together on Sunday mornings to be fed.  We are to do evangelism, engage in outreach, and be involved in ministries of mercy, but Sunday morning belongs to the sheep. It is the task of the pastor and of the church to feed the sheep. If someone who is not a sheep comes in, that's fine, but we're not going to change the menu and give the sheep goats food…….Babies have almost no influence in a culture. Before they can turn the world upside down, they have to grow up, they have to become mature, and that happens as they are fed the Word of God. Nothing less will do.  Notice that when Jesus spoke to Peter, He did not say, 'Peter, if you love Me, feed the goats.' Neither did He say, 'Peter, take care of your flock; feed your sheep.' He said, 'Feed My sheep, feed My lambs, tend My sheep.'

Thanks to Ligonier Ministries for sending me a free copy of this book in exchange for my review of the free pdf copy!

You may purchase this book at the Ligonier store
http://www.ligonier.org/store/john-hardcover/