The Story of the Bible by Larry Stone

As the title evinces, this book tells the 'story' of the Bible.  It gives a basic overview of how the Holy Scriptures were preserved, discerned and compiled into one book.  It includes full sized pull out copies of pages of important Greek and Hebrew manuscripts(such as the Dead Sea Scrolls), as well as scans of pages from important Bibles(such as the Tyndale Bible and Luther's translation). 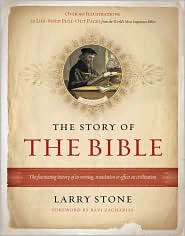 I think that this is a great resource.  It is easy to understand, explaining the various technical terms used(like 'codex'). It takes you on a quick trip through history, from the writings of the Old testament in Hebrew translated to Greek, and also the writings of the New Testament Apostles being copied and gathered together and translated into various languages.  It is fascinating to see how God preserved His Word down the centuries, and to see the various ways He chose to protect, spread and validate it.  For instance,  I didn't know that the Dead Sea Scrolls were such an important confirmation of the Scriptures we call the' Old Testament' that we have today.   Before finding the Dead Sea Scrolls, Bible translators could mainly only translate the Old Testament from the Septuagint, the Greek translation of the Hebrew texts.  As the books explains, the Hebrew manuscripts of the OT texts that we had(except for one small papyrus) were about a thousand years apart from the "writing of the last book of the OT and the earliest Hebrew manuscript.  This lack of ancient Hebrew manuscripts raise the question of how faithfully the Old Testament had been transmitted." But the Dead Sea Scrolls "have given us nearly the entire Hebrew Bible in manuscripts that are one thousand years older than those previously available.  The Dead Sea Scrolls provide astonishing confirmation that the Old Testament Scripture we have today is virtually the same as that being read a few centuries before Christ.  The accuracy of transmission is remarkable!"
It also has interesting facts, explanations and histories scattered throughout the book, in various places.  I especially like the side explanation and illustration of Ancient Hebrew writing being a  'memory assistant/refresher', I found that fascinating.   The pull-out copies of manuscripts and Bibles were a very nice edition as well.   All in all,  I think it is a great tool for learning about how we have the Bible the way it is today, and to confirm our confidence that it has been accurately preserved.
I have received this book as a complimentary copy  from BookSneeze®.

This book may be purchased at Amazon.com
Posted by Sarah L. at 10:52 PM

Email ThisBlogThis!Share to TwitterShare to FacebookShare to Pinterest
Labels: books