The Basic BIble Atlas- By John A. Beck 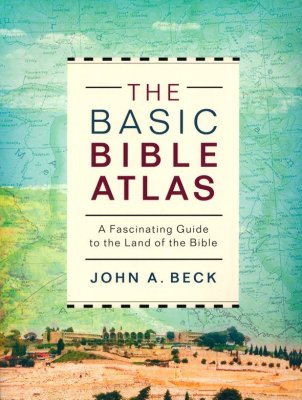 This Bible Atlas takes you through the Bible with maps.  The maps are nice looking, and interesting to study.

But…There is a lot of reading, sort of summing up a lot of Israel's history and their geographical movements.  Others may not mind it, but for some reason the readings seemed to distract me from the maps, rather than enhance them. Also, the maps don't always seem to fit with what is being talked about.

There were several 'iffy' statements made by this book that bothered me.

Beck states that animals were in the Garden of Eden to "provide companionship to the first humans who lived there.." .  But doesn't that contradict Adam's not finding one suitable companion among the animals he named? If animals provide true companionship then Adam didn't really  need Eve.

"On the one hand, the ark is a symbol of divine mercy, a rescue raft that keeps Noah's family and the animals aboard alive.  On the other hand, the new spatial focus highlights the problem: those aboard cannot live without land, and there is no land on which to live.  As the weeks go by and the limited supply of food on board the ark dwindles, we feel the pressing need to return to solid ground."  Who says that those aboard cannot live without land? Couldn't God have kept them alive in the boat for any length of time? Couldn't He have kept the supply of food from running out?

"He(Jesus) spoke to their needs using language that reflected experiences from their lives.  This included not only the rigors of farming and fishing but also debt slavery (Matt. 18:23-35) and being cheated - paid less than they were promised as day laborers in vineyards (20:1-16)."
And yet in a lot of the accounts of Christ speaking to the people he wasn't really speaking to be sympathetic regarding their hard lot but to make a point (and sometimes to make a point that they weren't supposed to understand - Matt 13:11-15).  In the case of the day laborers, Jesus doesn't say that the point of the story was that the Master had cheated his servants, rather the thing we seem to need to take away about the Master seems to be that the Master can do whatever he wants, "But he answered and said to one of them, Friend, I do thee no wrong: didst not thou agree with me for a shilling? Take up that which is thine, and go thy way; it is my will to give unto this last, even as unto thee. Is it not lawful for me to do what I will with mine own? or is thine eye evil, because I am good?(Mat 20:13-15)"  And, if one thinks that the point of the story is that servants are being cheated, what does that say the Kingdom of Heaven?  Jesus said that this account is an illustration of the Kingdom of Heaven. So is the point of the story that the Kingdom of Heaven is an unjust Kingdom?

This book didn't really have me focused on the maps, it seemed to carry one through it all with seeming little thought to the maps actually being examined.   But that's just my opinion, others may have no problem with it. And again, the maps themselves are rather nice, and are interesting to examine.

Thanks to the folks at Baker Books for sending me a free review copy of this book (My review did not have to be favorable).

This book may be purchased at Christianbook.com and at Amazon.com
Posted by Sarah L. at 8:56 AM

Email ThisBlogThis!Share to TwitterShare to FacebookShare to Pinterest
Labels: books