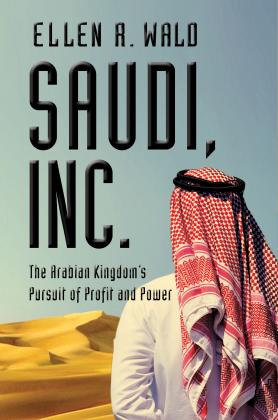 This book is being released in a paperback edition on September 10th, so I figured I'd re-post this review (I've been wanting to read it again and am planning on doing that with one of my sisters who I think will enjoy it as well):

I don't know that I would have EVER thought that a book about the Kings of Saudi Arabia and an oil company would have been interesting. But this book is! I don't just mean that the book is well written (it is) but Wald actually seems very enthusiastic about the topic and that carries over to the reader.  Or at least it did to me. I almost want to laugh at myself for how interesting and intriguing I found this book, "SAUDI, INC. The Arabian Kingdom's Pursuit of Profit and Power" by Ellen R. Wald.

Abdul Aziz, or ibn Saud, the founder of Saudi Arabia (never realized where the name came from, sort of a 'duh' moment when I found that out: SAUD-i Arabia) was quite an interesting guy.  He started out by conquering his hometown of Riyadh and then ended up growing his territory over time until he had even conquered Mecca.  He and Sheikh Abdullah Sulaiman, the man he put in charge of his finances (also an interesting character), made quite the team to build up the Kingdom and solidify its well-being for the future. That was one of Aziz's goals, to ensure the continuation of his Kingdom.  In order to even continue as a kingdom, he needed money, very badly.   This is where oil comes into the picture.

Americans thought that Saudi Arabia might be a potential source of oil and so they requested permission to search for it. King Saud did not expect their search to be successful, but he saw a financial opportunity in this. He could charge the Americans a fee to search his country for it and also obtain rent from their premises, and then royalties from oil sales, if there was any to be found.  Even if the Americans didn't find oil, his own country would still get something out of it.

Lo, and behold, after much searching and near failure, a significant source of oil was found. Four American companies ultimately teamed up to work in Saudi Arabia.  They renamed the company, calling it the Arabian American Oil Company, or Aramco.   Along with American oil operations came American equipment, American housing structures for the workers, an airport, hospital and power plant and other American luxuries.  The King wanted those things for his country.  He had more money than he had ever had before, thanks to Aramco.  Though Saudi Arabia did not have the ability, as of yet, to build these things for itself, they could pay foreign venders to do it for them.  Saudi Arabia was so successful in their modernization that Abdul Aziz was invited to extend his rule to other places, though he declined the offer. Ruling the territory he currently had was already a tough enough challenge.

This historical account does not merely focus on the Sauds and Aramco at a high level.  Wald zooms in, as it were, on the individual lives of many of the characters involved, using their stories to help move the book along.  You'll learn about the Saudi Kings:  the beloved founder Ibn Saud, and his sons who succeeded him, all of whom had unique personalities of their own.  Saud and Feisal, for instance, were opposites in personality.  King Saud - was a bad governor and a spendthrift who loved luxury.  He was, somewhat forcibly, persuaded to give up his government to his brother Feisal, was a much better ruler.

You'll also learn about non Royal Saudi Arabians,  Aramco employees, and American Ambassadors who, at the beginning of the Aramco and Saudi relationship, often had to act as intermediators between the company and the Kings of Saudi Arabia.  Wald often repeats who these people are, by mentioning what their job or position is, or by giving you a reminder about their background which can trigger your memory as to their identity.  I really appreciate that as I often have a hard time keeping characters straight in my head.

Wald demonstrates how wise the Sauds were in their being willing to acknowledge that other countries were more modern than they and in their being willing to learn from those countries. They had foreign companies and workers come in and do the work while they learned until they were finally able to take over themselves.  Ultimately the Sauds were able to take over Aramco itself by means of this strategy. Instead of forcibly nationalizing the foreign oil company, as some other countries had done, the Sauds were very patient and were willing to wait.  They eventually even started having more and more young Saudi Arabians educated in other countries to increase their knowledge and to have more to contribute to their society when they returned. By the time the Sauds completely took over Aramco they were more ready than other countries, who had acted in haste, to run the oil industry themselves.

The book ends at the beginning of the reign of King Salman (2015) and does not deal with later plans of Saudi Arabia like Vision 2030, but the whole book gives you the history of the development of Saudi Arabia, which development and growth would eventually lead up to that plan and it gives you the big picture of the Saud mindset of always looking to the future.  The Sauds are still looking to the future, they want to stay in the energy business and realize that oil will not stay a major source of energy forever and so they are making other plans to ensure that they will be a long-term relevant energy source.

As indicated at the beginning of this review, I found that Wald writes very well, her book really kept my interest. Some other books dealing with history are horribly boring, some so much so that I didn't finish reading them.  Boring history books just seem as though they are merely reciting a bunch of facts, and after a while the continued recitation of various names, dates and events becomes quite dull and very hard to retain in one's memory. Wald, on the other hand tries to get you to picture the people, their personalities, their thoughts and the events and circumstances in which they are involved. She uses excerpts of historical quotations and recollections of many of the people involved in order to do this.  She truly seems to find her topic interesting and seems to have worked hard to make it interesting to the reader.

Very well written, intriguing and even fascinating.  Wald really drew me in to the history, and she might draw you in too, even though it is just a book about oil and Kings.

I received a complimentary Advanced Reading Copy of this book from the publisher for review. My review did not have to be favorable. Many thanks to Pegasus Books!

You may purchase this book at Amazon.com in a hardback edition, paperback(released the 10th of this month) and Kindle edition.
Posted by Sarah L. at 8:59 AM No comments: