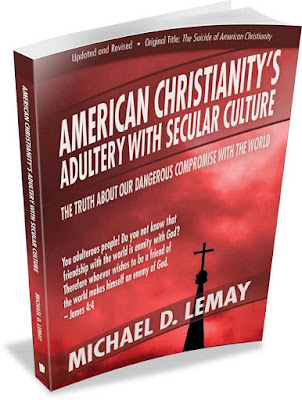 American Christianity's Adultery With Secular Culture by Michael D. Lemay addresses the American Church's desire to be relevant to the society around her. I saw the title and some of the contents of this book online, and was pretty intrigued, looking forward to reading it. But, after going through it, I have mixed feelings.  Let me try to explain.

First, let me explain some of what this book is about:  In this book, Lemay goes through and points out many of the philosophical poisons the church voluntarily drinking and diluting the gospel with.  Thinking they're improving it, the modern church is actually making it deadly. The author lists several popular teachers and preachers of our day and points out specific heresies of their teachings.

The author attacks the notion that we need to make God and the gospel more palatable to the unbeliever, and laments that so many Christians are content to not spiritually grow.  He also attacks the heresy that repentance from sin is not a part of God's gift of salvation, and that we are free to do whatever we want in Christ.  "Jesus died to free us from sin, not from obedience."  I especially liked his pointing out that church meetings are primarily for believers, not focused on unbelievers.  I'll quote my favorite part here:  "The early church was a family, not a social club. Christians came to learn more about the Word of God.  They shared meals and possessions when necessary, and they challenged one another and together raised the corporate level of Christian spirituality.  They were committed Christians, not curious strangers.  They didn't send out fliers announcing cleverly disguised outreach events that are just ploys to attract new members.  If you weren't serious about the gospel, you stayed away.  The Word was not reduced to the lowest level of common understanding, allowing the spiritually weak to drag down those who wanted to pursue holiness and righteousness."   I thought that was pretty interesting.  We all are committed to helping each other grow and understand the message, it's not the preacher's job to teach the elementary truths of the Gospel every single Sunday, he is focused on discipling his congregation and having many of them at the level of eating spiritual 'meat' and his congregation will help him teach the elementary truths to new believers.

Now, as I said, I really liked some parts of the book, but there were others that really bothered me.
For instance, at least at the beginning of the book, the author is very much focused on the American church's relation to the country as a whole.   He apparently thinks that, in their separating from England and setting up a new republic, the founding fathers were inspired by the Holy Spirit.  That kind of shocked me.

He says things like, "a free republic and a strong church need each other.  Secularists and extreme left-wing  progressives realize this, and their attacks to implement 'hope and change' are a coordinated assault on both the American republic and Christianity in America."

"..American Christianity was entrusted by our founding fathers to be the moral guardian of this nation….We, the professed body of Christ in America, have failed this nation and its citizens."

"The church was  to be the guardian of this nation, providing righteous, moral boundaries to keep this nation 'under God. But the church started to remain silent at a time when our nation needed it the most."'

"our democratic republic is, I believe, the one form of human government that comes closest to getting it right with God."

"We need to become willing partners with God to reclaim the culture from the Enemy."

I'm sorry…but I don't see how one could claim that our Republic is the best form of government before God.  Do I prefer it? Yes.  Am I against it, absolutely not! And I am so grateful to live in this country and have the privileges that I do. And I think that it is a gift of God allowing us to (for the moment), as Christians, to live "quiet and peaceable lives" (1 Thess 4:11). But biblically, I don’t see where, in the Bible, this type of government is promoted by God.  God didn't propose a republic to Israel (No, the absence of a King did not make it a republic, and the times of the Judges were not times of democratic republicanism).  And, remember the statue in Daniel? Which government was the Gold Head? A Monarchy, Nebuchadnezzar's government.  After that, things degrade, and by the time we get to what might be symbolizing the time of our government, we're a mix of clay and iron.  Hardly as valuable as gold and I'm not sure how sturdy that is either.

Of course, someone might point out that the best government is a Theocracy.  Yes, but that is not what America is or ever was. That will only come in the Millennial Kingdom. America might have claimed to be "under God" but she was not ruled by God.  Remember what John said, "We know that we are from God and that the whole world lies under the control of the evil one." (1 Jn 5:19)  I don't think that has changed. In the past, America might have been more strict about keeping some Christian morals and being mono-theistic, but, as in any premillennial age, her people were still ruled by the god of their age (2 Cor 4:4), even if that "age" looked morally better than ours.  For all we know, America was populated by a bunch of self-righteous mono-theists who attempt to keep the ten commandments. Satan would be okay with that.  And that might be what we get back to by "reclaiming the culture from the Enemy".  We won't be able to do that anyway, and it never will be claimed by Christ, until He comes again. The church is here to make disciples of individuals, not of the culture.

Because of this and some other things that the author said and pushed that I did not think were biblical,  I didn't like it well enough to give it a high rating.

Thanks to the folks at Aneko Press for sending me a free review copy of this book. My review did not have to be favorable.

This book may be found at Christianbook.com and Amazon.com