Made for the Journey - by Elisabeth Elliot 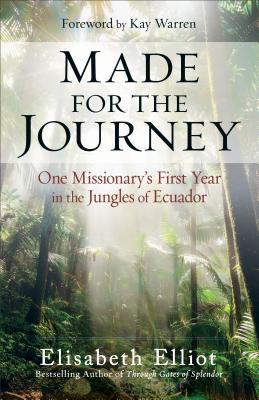 Made for the Journey by Elizabeth Elliot is an account of her first year as a missionary to Ecuador.  I've read it before as it was previously published as These Strange Ashes.

Elliot started her missionary full of excitement and triumphal expectation.  She was heading out the jungle to attempt to learn the Colorado Indian language in order to reduce it to writing and translate the Bible into that language. There is a note of underlying criticism throughout of the 'traditional' missionary way of doing things. Having started her work, she fights to have success in even figuring out the language.  She combats laziness in herself, but does start making some progress with the language.  Then everything falls apart.  People die, in tragic ways, including her main language informant.  She has difficulty continuing the study, but does have a good amount of language information to leave with those who would stay while she moved on to different work.  And then, after she leaves, the suitcase she entrusted to the missionary left behind with all (yes, ALL) of the language information is stolen and never recovered.  All of her work seemingly for nothing.

Elliot grappled with the thought, does God actually want these people saved? She came face to face with the sovereignty of God.  As she comments, "Faith's most severe tests come not when we see nothing but when we see a stunning array of evidence that seems to prove our faith vain." Now, I want to note here that though Elliot seems to believe in the overall sovereignty of God, she seems to have some trouble with the particular sovereignty of God, God's work inside of us. At the beginning of the book, in contemplating mankind she says, "Why did He give them in the first place freedom of will, power to choose, when surely He knew that their choices would be evil?...The power to exercise the will has been delegated to us and God will not usurp it."  But God does usurp our wills.  Changing someone into a completely new person is a very drastic act, a very personally invasive act. When we become Christians God changes our will, He makes us New Creations (2 Corinthians 5:17), we are taken out of slavery to sin and we become the slaves of God(Romans 6:22).  I think that Elliot unconsciously acknowledges this in her writings as she seems to contradict herself in places.

There are a few other things I had trouble with, for instance, she talks about the hard part of a missionary trying to figure out how to convert people to Christianity without changing their culture.  I don't completely understand this fear of changing the culture of those we witness to.  Yes, we don’t want to convert people to our ethnic culture, but the culture of those who convert to Christianity will inevitably change. For instance, If people have a culture where they do not wear clothes, they will find in the Bible that God is the One who instituted the wearing of clothing. They will realize that wearing clothing is an acknowledgement of humanity's fallenness. That after the Fall, public nakedness is presented in the Bible as a shameful thing.  Even after we become Christians, though our inner man is renewed, our outward flesh is not yet glorified (2 Cor 4:16, Rom 8:10-11,23).  Though, interestingly, it looks as though clothing will be worn even in the New Heaven and new earth (Rev 6:11, 7:9).  Any practice of any particular culture that is not in accordance with God's will, will disappear in the lives of people who grow in Christlikeness.  And that's not a bad thing.

That said, I still really liked this book.  I just needed to get those things out of my system.  Elliot writes very, very well and really pulls you into the account. You feel as though you are in the jungle with her, experiencing her excitement, exhaustion and confusion. You can "see" and "feel", as it were, the jungle around you and the strange sites and the different people she comes in contact with, her descriptions are so vivid. She portrays clearly her own bewilderment with the acts of God in her work as a missionary, but then pulls the perspective back to submission to God's sovereignty and rightness, whether or not one sees the "why" or the "rightness" of things, we believe in the righteousness of the God who allowed them and so submit. I'll end with a quote from the book, "Faith, prayer, and obedience are our requirements.  We are not offered in exchange immunity and exemption from the world's woes.  What we are offered has to do with another world altogether."

Many thanks to the folks at Revell Reads (A division of Baker Publishing Group) for sending me a free review copy of this book! (My review did not have to be favorable)

This book may be purchased at Christianbook.com and Amazon.com