Tales of the Kingdom by David and Karen Mains 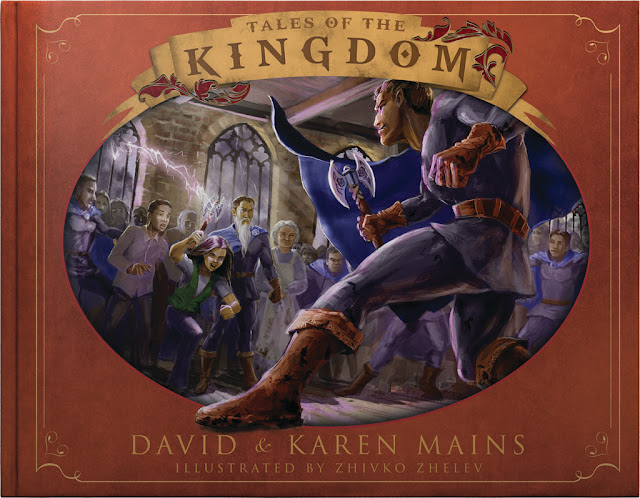 Tales of the Kingdom by David & Karen Mains is an allegorical story about characters who live in a magical world with bad guys and good guys.  I have vague memories of hearing this book as a child, and I  I recall thinking it was rather interesting, though I didn't remember a lot about it.

As a story it is an interesting tale of girls and boys who find refuge in the forest with the exiled King.  Different lessons are learned by various unique characters, who all find a place in the Kingdom. There are creepy bad guys, like the Enchanter and the Burners and Naysayers.  The book tells stories   about individual people in the various chapters, switching back and forth between some, and introducing new characters in others.  They ultimately fit together very well as an overall story. There is the girl named Dirty, who loved being dirty and lived with the pigs, but comes to realize her horrible situation and wants to be clean.  There is the boy named Scarboy (later Hero) who has a hard time coming to grips with his usefulness while thinking that the scar on his face is an impediment.  There is a princess named Amanda, one of whose skills is spitting with great accuracy. Kind of a strange thing…. There are even stranger characters as well.  Perhaps the weirdest of all is the Ranger  Commander who is also the "Caretaker" who makes flowers and things grow. Think of a hippy who is not opposed to war.

And another thing, If it weren’t meant to be a Christian allegory, I would probably have liked the book more overall, but it is supposed to be Christian allegory.  There are some odd symbolisms that I don't quite understand but My main problem is the portrayal of the King (who seems to represent Christ).  At times he seems serious, but then at others he seems like some sort of happy-go-lucky guy.  Let me quote an example, The King is talking to one of the main children of this story, and he says, "'Can you do this?' He sprang onto his hands and balanced his feet in the air as he moved across the grass.  Hero hadn't spent all afternoon on the practice field for nothing.  He lifted his hands above his head, then went down to the ground with his feet in the air.  He walked around awkwardly until he faced the peasant.  They looked at each other upside down."  That is not the way Jesus is portrayed in the New Testament.  Also, toward the end, a girl who had been rebellious is now coming back but is afraid of how the king will receive her.  "The King folded the weeping child into his arms.  "Don't leave me, Amanda,' he whispered, 'We've all been so lonely without you.'  That is not accurate either, God is not lonely for humans, and not lonely in general (The Father, Son and Holy Spirit do not need company). He does not need us, and does not lack anything that we can give Him (otherwise, He wouldn't be God).  The loneliest moment, and probably the only lonely moment Jesus has ever had was, not when His disciples forsook Him, but when the Father did so.

But if you just look on it as a story, not an allegory, then it's okay and just an adventure (though it's kind of hard to do that when the king says as a battle cry, speaking of his father, "To the Emperor of All! To the One Who Always Is!". But one could change that while reading it out loud.

The pictures are interesting, I would have enjoyed studying them as a kid, though some are pretty weird.  My little brother loved the picture of Amanda and the Dragon, because he really likes dragons and this one is illustrated well.  He kept asking if he could look at the book, just to examine the dragon picture some more.

It would work well as a bedtime story, if you can get your kids to only listen to one or two stories. It is adventurous and well written.  If a little odd.

Many thanks to the folks at BookCrash for working with the publisher to provide me with a complimentary review copy of this book! (My review did not have to be favorable)

This book may be purchased at Amazon.com and at kingdomtales.com
Posted by Sarah L. at 8:23 AM