The Kingdom Files (book series) - Who was Esther? and Who was David? by Matt Koceich 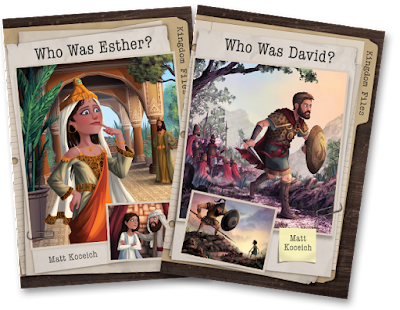 These books are intended to teach kids about various biblical characters.  I read the ones on David and Esther.  The books are made up of various "files" for kids to investigate the particular characters in any of the given books. Starting out with a "Fact file", which gives a few facts about the person you are looking into, including a tiny timeline with about three events selected.  Next comes the "Action File", giving a summary of the person's life, along with various illustrations.  Lastly comes the "Power File" which gives you some ideas of what you can learn from the life of the person you are studying, and also provides you with memory verses from various books of the Bible.

I'm sorry to say that I was disappointed with these books. First of all, they seem more like books for kids younger than 8, not 8-12. The biographies skip too much, it doesn't mention that Jonathan's father tried to kill Jonathan when Jonathan defended David, it doesn't mention that David's wives were taken when the city he was living in was raided, it just said that they recovered everything that was plundered.  There is no mention of David's sin with Bathsheba, or his having her husband killed, it just says later on that David made mistakes in his life.  When David's son Absalom is chasing David, it has a "Clue" on the side: "David was being chased by someone close to him.  He was being hunted even though he hadn't done anything wrong." But, don't we know from the Bible that this was a part of the consequence of his sin with Bathsheba (See 2 Samuel 12:11)? That was certainly something that was very wrong.

Also, the "Clues" scattered throughout their book don't make much sense to me.  The introduction to the books says that the "Clue Boxes will offer applications to help you keep track of your thoughts as you make your way through the files." Okay, fine.  But look at one of the "Clues" "Crags of the Wild Goats is located in the Judean wilderness. It's made up of rocky cliffs.  The ibex mountain goat is found in this area".  What kind of application is that?   How does that help me keep track of my thoughts? It helps me keep track of the story, but doesn't keep me an application to anything.  They should have just been called "Fact Boxes" or "Investigating Further".  Their purpose as "Clues" just didn't make sense.

Speaking of facts, in the "Fact File" there is information that is not so factual.  For instance in the fact file in the Kingdom File on David, after talking about the temple and that it was mainly used for sacrifices to God, it says, "Once a year, the high priest would go into the holy of holies, pray to God and ask God to forgive the people of Israel's sins."  And so God just forgave their sins on the merit of the prayers of the high priest? I'm not sure that the High Priest prayed at all. The High Priest had to go in to the holy of holies with the blood of an animal, he couldn't just pray for the sins of the people to be forgiven, there had to be a sacrifice of an animal on their behalf.  "but into the second the high priest alone, once in the year, not without blood, which he offereth for himself, and for the errors of the people"(Heb 9:7)ASV

In the "Kingdom File" on Esther, "On the surface, Esther's story is very similar to our spiritual life stories because she was taken from a faraway place into the presence of a king, just as Jesus saves us from our sins and brings us into His Father's house."  Ummm… Esther probably wasn't the most excited when she was taken away from her home to be one of a bunch of other candidates to have a chance to be the King's replacement Queen…failing that, she would definitely become one of his concubines.  She would probably rather have stayed with Mordecai, where her life surroundings were more likely to be moral. This part of Esther's story is hardly an accurate comparison to Jesus saving us from our sins.

And now for the illustrations…the cover images are pretty neat, ones I would have liked examining as a kid, but the ones on the inside would have disappointed me.  Especially the ones in the David book, where, unlike on the cover, he looks very blond; so much so that when they depict him as a young man and give him a beard he actually looks old.  And at least one of the pictures is biblically inaccurate.  The book tells about where Saul goes into a cave and, unknown to him, David's men are there hiding and David cuts off the corner of Saul's robe.  It doesn't tell WHY Saul went into the cave…but I can live with that.  My problem is that this part is illustrated and has Saul wrapped up in his robe sleeping in the cave and David cutting off the corner of his robe.  That's false.  Not that I think that part should be illustrated in the first place, but don't illustrate it wrong!

All in all, these books just weren't accurate enough for me to like them.

I received a complimentary copy of this book from Barbour Publishing and was under no obligation to post a review.

These books may be found at Amazon.com
Who Was David?
Who Was Esther? 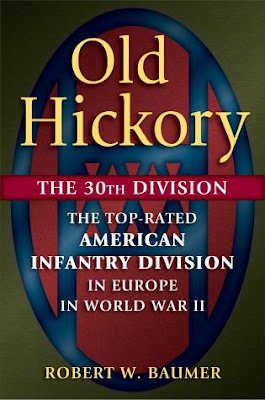 Originally I was looking for a biography that would tell about General William K. Harrison, as I had learned some things about him and wanted to know more.  There is no biography that I could find that was in print about him, but I came across this recently published book about the division he was assistant commander of, "Old Hickory: the 30th Division by Robert W. Baumer

This account of the 30th division was interesting in and of itself.  These guys were quite tough, and determined.  Made up of National Guards, they remained vigilant with their duties even when, in preparation for them to be trained to join the fight, higher ups demanded that their national guard commanders be replaced with regular army commanders.

They were not a part of the first wave of D-Day, they were in a following wave some days later, but they were a big part of Operation Cobra, which was to break through further into France. Before I read this book, I had never really considered the problems that military air force bombers would have in hitting their targets accurately. In Operation Cobra, the 30th division is set to push further into France, but there would be an air bombing of the enemy first to soften things up for the men on the ground, to make their advance easier. There was some concern beforehand that the bombers would have difficulty in telling where to drop the bombs, but those concerns were brushed over.   It was a disaster.  The bombers hit their own men, killing many. Their losses were more than the Germans.  The attack wasn't followed through with that day and postponed until the next.  The Germans didn't know that the Americans had hit their own men, and they thought that what had happened was some sort of trick.  And then the same thing happened on the following day.  I almost laughed with amazement at the message that was sent to one of the Generals: "They've done it again".  It was horrific and quite demoralizing. But the attack by the men still had to happen, and so they set out, even traveling through the carnage of their own side caused by friendly fire.  You feel so bad, not just for the guys who were traumatized by it on the ground, but also for the pilots who were the cause of such demoralization to their own side.  They had a really tough job.

Also, although Harrison is talked about quite a bit in the volume, I thought it interesting that it doesn't mention that he's a Christian until he acts uncharacteristically and uses some inappropriate language, and then it makes sure to note that he was a "deeply religious man".  It goes to show that the world knows that Christians are supposed to be different and will notice inconsistency their faults more than in those who are not believers. One of the things Baumer emphasizes is that Harrison was very brave, and wanted to lead from the front. "He would become one of the most frequently seen general officers of WWII in the front lines with his men, and widely admired for his courage."  At one point, He ends up getting wounded while at the front and the general he served under saw him and Harrison felt the need to defend his actions, saying something along the lines of, "How else was I supposed to lead my men?" He apparently took the responsibilities that God had given him very seriously, and wanted to them well.

Before I wrap up, I do want to mention that there is a bit of foul language in the book, mainly in the quotations of various people. Also, the description of the guys having gone through "hell" in their multiple difficulties was WAY overused (not that it's accurate in the first place), I don't know that I've ever read a military book that used that description as much as is used in this volume.

That said, the book was pretty well written, and really 'pulled' me in places.  I found it intense, and parts are quite intriguing, I also liked that it included maps that give an idea of what was going on and where what the objectives were, I also found some things quite funny.  To give an example, during one of the 'war games' that the 30th division participated in, they were up against Patton, and he quit just before he was about to lose to them!

This book may be purchased at Amazon.com and at stackpolebooks.com