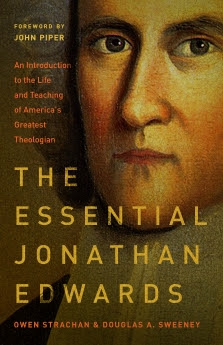 I've read a biography of Jonathan Edwards before, and I've read a small part of his writings, but still have felt as though I don't know Edwards and his works very well.  When I saw that this book, The Essential Jonathan Edwards:  An Introduction to the Life and Teaching of America's Greatest Theologian, by Owen Strachan and Douglas A. Sweeney, was available to request for review, I thought that this would be a good way to introduce myself more fully to Edwards.

The book is divided into five parts.  Part one gives a high level biography of Edwards with quotations from his works interspersed throughout.  The other sections are more topical,  with chapters dealing with Edwards' thoughts on "Beauty" (having chapters such as The Beauty of God, The Beauty of Creation etc.),  the other sections are "The Good Life", "True Christianity" and "Heaven and Hell".  All of these parts contain summaries of Edwards writings on various subjects along with many  quotations from his writings.

Do I feel like I know more about Edwards writings more?  I suppose so.  Does it make me want to delve into his writings? Sadly, no.  This is probably going to sound awful, but I found this book very boring. I stopped when I was about half way through and just skimmed the rest (the book is over four-hundred pages).

Perhaps a lot of my boredom came from Edwards' writing style, he seemed kind of mystical or something, in my opinion.  It just grates me the wrong way. It seemed more like some of his thoughts were floating in the air of unlimited conjecture without a firm grounding in exegesis of biblical texts.

Let me give you an example,

"the Old Testament church was as Christ's mother, but the New Testament church is his wife, whom he is joined to and whom he treats with far greater endearment and intimacy.  He forsook his mother also in this respect. Vis.  As he made a sacrifice of that flesh and blood, and laid down that mortal life which he had from his mother, the Virgin Mary.  'That which [is] born of flesh is flesh,' though he did not derive flesh from his mother in the sense in which it is spoken of, John 3:6, viz.  Corrupt sinful nature, and therefore did not forsake his mother for the church in the same sense wherein the church is advised to forsake her father's house for Christ's sake…..Yet Christ derived flesh from his mother, viz. the animal nature and human nature, with the corruption that is the fruit of sin, viz. with frailty and mortality.  This Christ forsook, and yielded to be crucified for the sake of the church."  Huh? That is really confusing. The editors of this book comment, "The doctrine of the church developed here is quite unique.  Old Testament followers of God represent 'Christ's mother, while New Testament believers are 'his wife.'"  It certainly does seem like a unique thought, and I don't see its biblical basis…

Edwards seemed to use a lot of typology, and was too….I'm not sure how to term it, scholarly? For my taste. Especially when he makes typological connections that are not given as such in the Bible.  Also, at times he seemed to be trying to work up emotions or something with his descriptions of the loveliness of God, of Christ.  Can one over 'describe the loveliness of Christ, of God? I think one can if one's descriptions savor more of the imagination than of solid basis in God's revelation of Himself.  Don’t we think that one cannot rival God's own descriptions of Himself in His Word?  Even Edwards? I'd understand more if he seemed to be exceeding texts, which I suppose he could have been doing, but then my opinion would probably be that he used too many illustrations.  I don't know, I'm still thinking about it, It's still rather hard for me to pin down why I don't like his writings, I've read other long dead authors whom I've liked.

I'm sorry if I'm misreading Edwards, but right now, this is my impression.  I'm not rating this book only two stars because I thought the authors did a bad job of putting this together.  I actually think that they probably did an excellent job.  I simply find that I don't particularly like Edwards as an author.

My Rating: Two out of Five Stars
**

This book may be purchased at Christianbook.com and Amazon.com