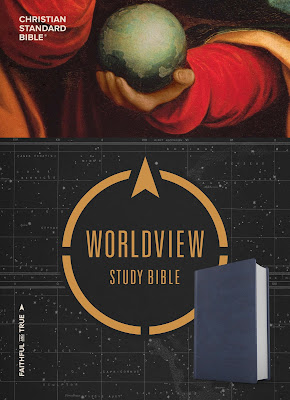 The Worldview Study Bible seeks to remind Christians that the Bible is not just a book that we read to feel more religious, we are changed by it, our thinking, our worldview, our perspective of everything is changed when we use it to renew our mind.

This Bible has many articles in it, scattered throughout and dealing with various 'worldview' topics, articles like: "Biblical Models for Business", "Engaging LGBT Advocates", "Emperor and King Worship in Biblical Times", "Animal Rights" , "A Biblical Assessment of Abortion", and so on.  Some of the articles are quite interesting and helpful.  Others, I had some trouble with some of the content.  For instance, in the article on "Biblical Formation",  dealing with various ways one can utilize the Scriptures, it says, "Praying through the Bible flows naturally from Scripture meditation.  Giants of the faith, such as Martin Luther, Charles Spurgeon, and especially George Mueller, made a habit of praying through Scripture…..Praying the Scriptures helps to assure that one's prayers are biblically sound and pleasing to God."

I think that if praying through the Scriptures was a way to pray correctly, then Christ would have told the disciples to grab some copies of portions of the Old Testament and pray them. He could have demonstrated by quoting one of the Psalms, or a passage of Isaiah.  But instead he gave them a model prayer.  How does one pray through the book of Leviticus? Or Judges? Should we pray the imprecatory songs, while thinking of a particular person who hates us when we are told in the New Testament to "Love our enemies"?  How would we know that the Scripture we are praying is the right scripture for us to be praying at that moment?  The Apostle Paul shows us that it is already assumed that we will have trouble praying biblically sound prayers, that we do not know how to pray correctly, but that's where the Holy Spirit comes in, "And in like manner the Spirit also helpeth our infirmity: for we know not how to pray as we ought; but the Spirit himself maketh intercession for us with groanings which cannot be uttered;"(Rom 8:26) The Spirit wouldn't need to intercede for us if we already knew how to pray as we ought, and the Bible doesn’t say that we ever will get to a point where we know how to pray correctly, this side of eternity.  That's where our Helper comes in.

And then, there is an article that seems to downplay the validity of Christian young earth creationists arguing with Christian old earth creationists, as if they should focus on arguing their common enemy (atheistic evolutionists) rather than debate the validity of each other's hermeneutic. But don't we remember that bad doctrine will most likely come from within the "church"?  Aren't we to look out for our brethren and correct them in a fault? Aren't we judging those within the church, see 1 Cor 5:12 (I know, that passage is dealing with practical moral sins, not necessarily bad viewpoints, but its implications may apply here as well), aren't we critiquing the viewpoints of those within our midst, making sure that we all have an accurate view of God's Word? We don't expect the world to listen to us, we don't expect the world to ever have a correct viewpoint, but we do want to help our brethren, fellow Christians, stay away from dangerous hermeneutics.  We are our brother's keeper.

This Bible also has a good deal of commentary.  A lot of it seems pretty useful, and using a literal grammatical historical hermeneutic.  For instance, in the commentary on Jeremiah 29:11 it says, ""While it is true that from an eternal perspective God has good plans for believers (Ps 84:11; Rm 828), this of cited verse should be understood first with respect to its addressees; exiles who would have to wait an extended time for God to restore them…"  But the hermeneutic seems to change in spots, like in Revelation, where it speaks of the 144,000, "The number 144,000, with multiples of twelve and multiples of ten (completeness), is symbolic of the entire people of God.  That the tribe of Dan is missing while Joseph as well as Manassah (Joseph's son) are listed further supports the symbolic nature of the list."  Huh? How do those things clue us in to this section's not being literal?  The context would seem to indicate that it should most certainly be taken literally. After the description of these tribes, the VERY NEXT verse says,  "After this I looked, and there was a vast multitude from every nation, tribe, people, and language, which no one could number".  Differentiating this group of many peoples from the sealed of the twelve tribes of Israel.  How much clearer, could it be?  It differentiates between those in Christ who were sealed from Israel, and points out a more inclusive group later on, encompassing all peoples?  How much clearer could John get in describing what he saw? Does he have to go through each tribe and say, "And I heard the number of the sealed, 144,000, sealed from every tribe of the sons of Israel: 12,000 from the tribe of Judah were sealed, Judah was the son of Jacob (also called Israel), the son of Isaac, the son of Abraham, born in the year such and such.  The tribe of Judah was made up of all of the living descendants of Judah.  The first descendant's name was George, the second, Robert…..the 12,000th, Charles.  And I also saw that their physical features resembled Judah's.  12,000 from the tribe of Reuben were sealed, Reuben was the son of Jacob (also called Israel), the son of Isaac…." Would that make it more likely to be literal?  I suspect that some would think that the more detailed it gets, the more figurative it is.  Omissions and replacements of tribes does not mean that this is not to be taken literally, it probably should be taken VERY literally and the omission of Dan might be significant in some way, taken as such.  We shouldn't assume that the omission of one of the original tribes indicates that this is not Israel.  Why would God HAVE to choose men from the tribe of Dan to be sealed in order for this to be literal, ethnic Israel? Do we not remember what Paul tells us in Romans 9?  Not all Israel is Israel, and that God has the right to choose whomever He wishes within Israel (even individual tribes).

This "Worldview" Bible has a lot of good notes, and some interesting essays, I just don't like some of the concepts in the essays, nor do I like the inconsistency in the hermeneutics.  Also, the essays scattered throughout seem a bit too distracting.  I think that if you are going to put multiple essays in a Bible it would be better to put them at the end of the book, and then you can just look up the page number in the index if you want to read a particular article, instead of it breaking up the text.

This particular study Bible is okay but not great.

Many thanks to the folks at B&H publishers for sending me a free review copy of this Bible! My review did not have to be favorable.

This Bible may be purchased at Christianbook.com and at Amazon.com