The Hermeneutics of the Biblical Writers - By Abner Chou 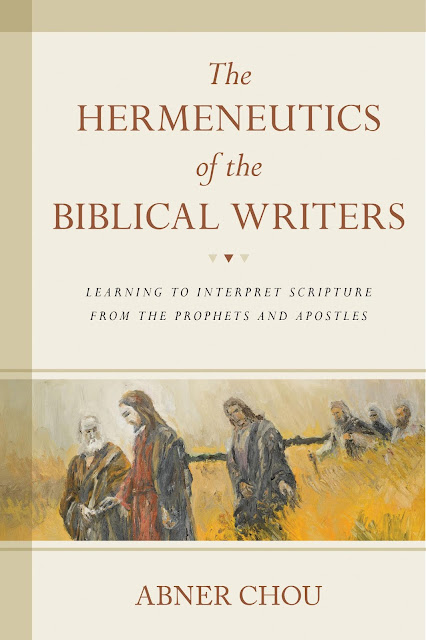 I saw that there was a book on hermeneutics coming out by Abner Chou.  I thought his name sounded familiar, looked it up and remembered that I had listened to a message by him a while back, critiquing the Christocentric hermeneutic and thought that it was pretty good.  Therefore I wanted to see how Chou would tackle hermeneutics overall in a book.

This book, The Hermeneutics of the Biblical Writers: Learning to Interpret Scripture from the Prophets and Apostles is written from the perspective that the Bible has a "built-in hermeneutic".  We don't have to come up with our own. I loved that Chou points out that we don't need to go searching the hermeneutical methods of the nations in the days that the books of the Bible were written, rather we search the Bible to see how the text interprets itself.

But sadly, overall I did not like the book.  Let me explain why.

First, I didn't like how the author keeps saying that the prophets were theological geniuses, they were experts in dealing with the Scriptures, they were experts at developing theology. If he just said it a couple of times I could have overlooked it, but he emphasizes it and seems to make it a major fact/point. Something you need to have fully ingrained in your head:   I'll give a few quotations to show you what I mean:

"The prophets were immersed in Scripture.  As a result they used it accurately in various situations and developed it theologically.  They could apply God's Word to their current situation (e.g., covenant disobedience and failure) as well as advance the theological themes and concepts therein via new revelation.  …In sum, the prophets were exegetes who carefully understood the Scripture, as well as theologians who profoundly expounded upon its ramifications."

"The prophets were immense biblical thinkers and writers because they were so accurate in handling the meaning and significance of Scripture.  That is what made them good exegetes and theologians."

"The prophets knew post revelation well enough to incorporate sophisticated theological ideas in their texts…the prophets intentionally positioned their writings for later writers to use."

So when it says that "the Word of the Lord came to Micah" that doesn’t mean that God actually gave direct revelation, it just means that Micah had studied previous revelation enough that he was able to formulate what he thought God would want to say to the Israelites, and therefore, the book of Micah is his own commentary on previous texts? At least that's how statements like the above come across to me.

I can almost see some of this somewhat applying to the Apostles, but not with the prophets. I don't doubt that they knew previous revelation very well, but in their case we know they received DIRECT revelation, the words to speak, and visions to describe, directly from God. The majority of the prophets' revelation was directly from God, not their own study of previous texts.

"knowing this first, that no prophecy of scripture is of private interpretation. For no prophecy ever came by the will of man: but men spake from God, being moved by the Holy Spirit." (2Pe 1:20-21 ASV)  Adam Clark explains this verse in this way "- That is, in any former time, by the will of man - by a man’s own searching, conjecture, or calculation; but holy men of God - persons separated from the world, and devoted to God’s service, spake, moved by the Holy Ghost. So far were they from inventing these prophetic declarations concerning Christ, or any future event, that they were φερομενοι, carried away, out of themselves and out of the whole region, as it were, of human knowledge and conjecture, by the Holy Ghost, who, without their knowing any thing of the matter, dictated to them what to speak, and what to write;"

Clark goes on to point out that it sounds like the prophets didn't really do their 'studying' until after they gave their revelation. They didn't have to understand their own prophecies at all, as the One Who actually gave them understood them perfectly.  The prophets didn't think up all of this stuff, they didn't imagine their own visions connecting them to previous revelation, God showed them visions that corresponded to previous revelation.  They didn't have to study out the previous revelation to come up with their own "Thus sayeth the Lord",  God actually did "say" these things.  God, who knew exactly how everything connected, was the Prophetic Genius giving the prophecies and intentionally positioning them for the later saints to use.

Second, I didn't like many of the hermeneutics Chou draws from the text. He makes some weird conclusions. For instance, that the prophets intentionally referred back to overall main concepts, for instance, that Daniel's  (God-given) vision of the beasts (chapter 7) being subject to the Son of Man is pointing back to creation and man having dominion over the animals, and that this vision signifies that creation will return to its original order?   That just seemed really, really weird.  Also he talks about the New Testament giving us a hermeneutic of viewing Christ as a new David (going into the wilderness like the Davidic dynasty went into exile, facing same trials as David, born in the same place as David), a new Moses, delivering His people from exile…etc.  I don't see that any of these are absolute hermeneutical principles that one should derive from the new Testament.   I think the point that we should see from all that Christ did is much simpler than all of that. Isn't the main point about Christ being born in Bethlehem, going into the wilderness, coming out of Egypt etc., not to fulfill a picture, (that of David or of Israel) but to fulfill the direct, clear, prophecies about the Messiah Himself? And thus clearly proving that He that He was the Messiah.

And then also that the prophets made sure that they used illustrations the same way earlier prophets did, like when many of them refer to an Eagle, they use an "Eagle motif", remembering how the "Eagle" picture was used in earlier revelation and  going along with that. I'm not sure that that's the point of the illustrations, that they can't be used to picture anything else, they have to somehow be referring back to the original context of the picture's first use. Perhaps I'm wrong, but I’m pretty sure that "yeast", in the New Testament is used as an illustration for various things (without every time being used to refer back to its original use). You can use the same picture to describe vastly different things, and I don't see that it's a hermeneutical necessity to have it refer to the same thing every time it's used.

There were some good things in this book, but overall I didn't find it as useful as I thought I would.  Chou rightly says that, "We connect the dots they (Apostles and prophets) established; we do not create new dots.  Immense theology is already there, we do not need to (and cannot ) add anything new." I'm just afraid that there were too many dots connected in this book that aren't clearly connected by the Bible itself.

Many thanks to the folks at Kregel Academic for sending me a free review copy of this book (My review did not have to be favorable)!

This book may be purchased at Amazon.com and Christianbook.com