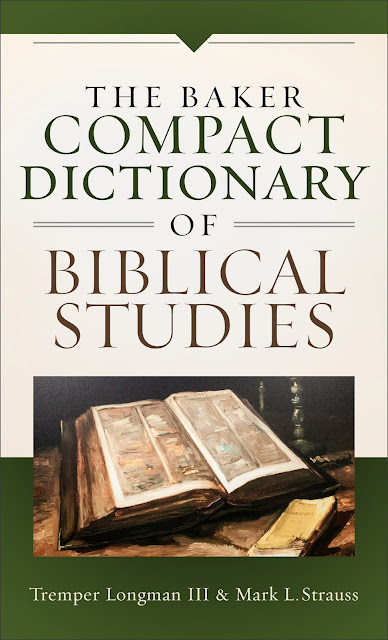 The Baker Compact Dictionary of Biblical Studies is a dictionary that seeks to provide definitions and explanations for words that you will find in many books and articles that delve into the study of the text of the Bible.  It gives definitions and brief overviews of places, scholarly terminology, prominent people whose works are mentioned in theological books.

It was pretty interesting to just sit and read through a lot of the information in the book, to learn a lot of new things and even to glean some extra helpful information about events, people and places that I already knew a few things about.  If I came across something that I've already become acquainted with I felt sort of reluctant to read those parts, thinking something along the lines of, "this is just a dictionary, what more could it tell me about that?" But I was surprised at some of the extra information I gleaned.  For example,  I have done a bit of reading on the "Counsel of Jamnia" but I did not particularly notice before that the book of Ezekiel was one of the books whose canonicity was debated by the Jews.  Or if I had noticed, I don't remember understanding why it's validity was up for debate.  The dictionary explains that it was because in the vision given to Ezekiel of the alter it is depicted as having steps which was something contrary to Mosaic law. Interesting!

At least  one bit of information I came across was quite shocking.  I was extremely surprised, when I came to the summary of who Gerhard Kittel was (editor of The Theological Dictionary of the New Testament), to find that he had had strong Anti-Semitic viewpoints and supported the Nazis during World War II!

There is some, in my opinion, pretty useless information in this dictionary, mainly the detailed information about various pagan 'gods' , their 'story' and the attributes attributed to them.  They don't actually have any attributes, so why mention them in detail? And I also didn't like how they mentioned how so many scholars think that The Biblical writers drew inspiration from myths and attributes of other gods, without countering that  viewpoint.  I guess I can sort of see how that could come in handy for someone who wanted to know which authors not to read, but I wish they would have countered them in the notes, instead of letting them stand.

All I need to know that it is a pagan god and therefore not a god at all.  The Bible doesn’t focus its attack on the mythological attributes of the false gods, rather it deals with the facts.  It points out their ACTUAL attributes of deafness, blindness, dumbness, irresponsiveness and utter lack of existence at all.

Another thing I didn't like , and   was surprised at, was the dogmatism in certain places, like where they state that "The Sumerians invented writing for the first time in human history sometime in the thirty-first century BC."  Oh, really? How do we know that Noah didn't know how to write already and taught it to his descendants? How do we know for sure that people didn't know how to write before the flood?

I was also surprised that they don't list Martin Luther, John Calvin, Jonathan Edwards, John Wesley and the like in this dictionary.  That just seemed a little weird, as their works are still pretty popular.

Don't get me wrong, things like the above don't take away from the usefulness of this book.  They do have a lot of information, and,  when dealing with 'grey areas', for the most part the editors of this dictionary seem to use phrases along the lines of "it is believed"  or "some scholars think" when the facts are not certain. And they do give some quick criticisms to a few of the obviously erroneous viewpoints.

Overall I think that this still  a pretty handy dictionary, for just about anyone.  If you read any linguistic commentaries on the Scripture, or even just a regular commentary, it would be handy to have.

Many thanks to the folks at Baker Books Bloggers for sending me a free review copy of this book!  -  My review did not have to be favorable.