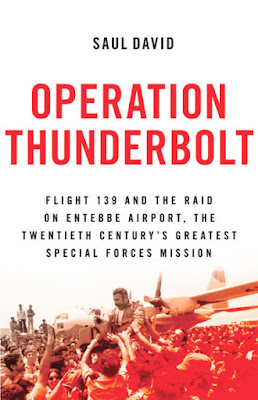 I knew a little about the famous Israeli rescue of hostages held in Entebbe but didn't know a lot.  'Operation Thunderbolt: Flight 139 and the Raid on Entebbe Airport, The Most Audacious Hostage Rescue Mission in History' by Saul David was an interesting way to learn about it.

David takes you through each day, in 'real time', as it were, bringing you back and forth from the hostages and terrorists to Israeli diplomats and military men, international political leaders and others,  continually switching locations to give you a perspective of what was going on in these significant places and among the various significant people throughout each of these 8 days of tension.

The knowledge of the many previous hijackings leads to the misgivings of several of the people who were about to be passengers(Many of whom were Jewish) of flight 139 when they found that the plane will not be making a direct flight from Israel (which had heavy airport security checks) but would be stopping over in Athens. Some consider changing flights and you feel anxious when they decide to take the flight anyway.

The book was well written, I found myself quite drawn into the account, getting to know the various people involved (David gives the background of many), you get to know the background of many of the hostages, the politicians who are involved in trying to figure out what to do, and that of the terrorists. Some of the people are brave, others exhibit cowardly behavior, but you really become interested in the fate of pretty much everyone. Though not necessarily caring about everyone.

I liked the real time format too.  It was fascinating to come to the realization (pretty much along with the hostages themselves) that the president of Uganda, Idi Amin Dada is working with the terrorists and therefore the hostages are being held, not just by a group of terrorists, but essentially they were imprisoned by a whole country.  That made it even harder for Israel to attempt a rescue, though it really did help with the element of surprise as neither the terrorists nor Idi Amin seemed to think a rescue attempt was even possible.

I also found myself getting frustrated at certain people. For instance, when the terrorists first took over the plane, some were for attacking the terrorists, others were for remaining passive - you kind of feel like yelling at the ones who think they shouldn't attack the terrorists, "Do something! They're probably going to kill you anyway!"

It was also bothersome to hear Yitzhak Rabin's arguments for negotiating with terrorists and I really felt for Peres in his arguments to the contrary, basically saying that by giving in it would make all terrorists realize that taking hostages and threatening to kill them works and then they'd have many, many more hijackings on their hands!

There were some amusing things in the book as well, such when the terrorists suspect one of the hostages of being an Israeli Spy and they force him to write an account of his life in Israel and he writes a monotonous account about picking grapefruit! And the part, after the rescue, where one of the Israeli diplomats calls Idi Amin to thank him for his 'help' and Idi Amin, who doesn't know that a rescue has taken place yet, is confused.  Amin and some of his military officers didn't know what was happening when the Operation took place, they suspected a mutiny and so did not send reinforcements right away (giving more time to the Israelis)

Now, I do feel the need to mention that some of the facts given in this book were awkward to discover, for instance, apparently several of the hostages were rather scantily clad (some extremely so)when they were rescued.  Also, some of the casual dialogue of the hostages was indecent, as well as some of their actions (particularly one man nicknamed 'the flirt'), so I skipped those parts.  There are some things I just don't care to know about history.

Also, at the end of the book (in the 'Acknowledgements' section) I noticed that the author mentions that in certain places he constructed dialogue himself (as none is yet available), based upon the character of those speaking.  He did it to  make it read more like a novel than a traditional story.  I don't know that I like that very much, when I read a history book I want to know I'm reading about facts.  But he describes them as "occasional bits of the story" where he did that, and so it sounds as though it wasn't a lot of made-up dialogue.  And another comforting thing is that in the back of the book there is a section that shows various reference sources quoted, or referred to in the book (and numbering which page of this book that the info was used on).  I just wish that, if David was going to make up dialogue he would at least put a footnote or something under the dialogue to indicate where these 'bits' are.

That said, all in all, I (and several of my siblings) found the book to be very interesting. And I wasn't the only one in my family who liked this book.  I had decided that instead of merely reading the book to myself I would read this book out loud to two of my sisters and we all found it interesting.  One of my younger brothers was nearby when we reached the day when the rescue mission was happening, I didn't know for sure that he was listening until I was showing one of the maps of the airport to my sisters and all of a sudden he was leaning over me as well gazing at the map.  He seemed quite intrigued with the rescue, I could even hear him chuckling in amazement at certain parts.

If you want to read a book on the topic, I'd recommend this one.  It's the first one I've read on the topic and I think that it was pretty informative, and also interesting enough to make the information stick.

Many thanks to the folks at Little Brown and Company for sending me a free review copy of this book! (My review did not have to be favorable)

You may purchase this book at Amazon.com and from other websites