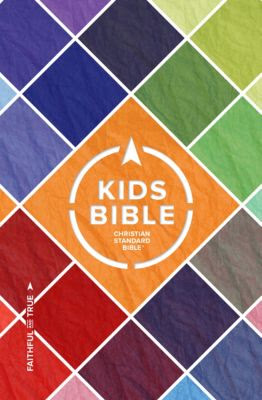 The CSB kids Bible is a pretty nice Bible. As to its physical characteristics of this Bible, it is a very colorful hardcover which kids will probably like.  Even the edges of the pages are colored.  I do want to note that on the inside of the front and back cover has an orange crinkly pattern, at first I thought that the pages were damaged, but on closer examination I realized that it was just a picture.

It has some colorful pages scattered at wide intervals through the Bible.  Many of them have summaries of what each book of the Bible contains.  They give descriptions like, "Matthew was originally written for the Jews and shows Jesus as the Messiah and King, in whom the Old Testament prophecies were fulfilled." Many of them give pretty good descriptions but I didn't like all of their summaries as some seem to be leaning toward a "Christocentric" hermeneutic instead of a literal, grammatical, historical one.

Some pages have maps, and others have lists of verses dealing with various topics, like the miracles of Jesus, or "Kids in the Bible" where they list many passages that give accounts of children.  I'm sort of surprised that they didn't include the  account of the boys who called Elisha "Baldy!" (2 Kings 2) , Elisha cursed them and bears came and mauled many of the children. Yeah it's graphic, but it's an account of children and they had the account of Cain and Able (whom Cain murders), which most kids probably already know, so why not that one? Most kids probably don't know that account. I'm saying that partly to be funny but I'm also sort of serious.  Why just include the most 'famous' accounts and not the more obscure?

Anyway, back to what these pages contain, there are a couple of pages with illustrations of the twelve disciples (as a kid I probably would have liked looking at that page in particular)with some descriptions of what they did and who they were.  I did find it amusing that they didn't really have any information to give concerning some of the disciples. For instance, under "James, Son of Alphaeus" they say, "The Bible tells nothing about this man except his name."

As to the translation, it is a pretty good one.  I do wish that they would list more textual variants in the footnotes though.  For instance, in Psalm 40 vs 6, where it says, "you do not delight in sacrifice and offering; you open my ears to listen." I didn't like that they didn't include a footnote for that verse giving the Septuagint variant , which, instead of referencing "ears" being opened, says, "a body you have prepared for me".  That is an important variant because it is quoted in the New Testament by the author of Hebrews.  If kids follow the verse reference in Hebrews 10 back to the source of the quotation in the Psalms they may be confused that the author of Hebrews seems to be misquoting a prophetic text.

And then in their page on, "How Do I Have Quiet Time With God?" there was something else I felt rather wary about.  After being instructed to pray about various things, the kids are told to "Listen for God to speak to you".  So listen for an audible voice? Wait for an inward feeling? That just seems like quite a mystical thing to do.

Parents may also want to know that at times this Bible version can be more 'modern' in translating certain words.  For instance, when referring to physical relations, at times they will translate it, "So-and-So was intimate with his wife" but at others, they are more modern.  For instance, where the men of Sodom see the Angels that come to bring Lot and his family away, they have them as saying, "Send them out to us so we can have sex with them!"

Those things being noted, I like the translation overall.  And parents can talk to their kids about any concerns they have about any extrabiblical information and instructions that this Bible includes.

Overall, this is a nicely bound Bible that has some colorful inside pages, as noted above, and even includes a small topical concordance in the back. I particularly like the font size, it is nice and big, kids should have a pretty easy time reading it. Overall I think this would be a pretty handy Bible for kids.

Many thanks to the folks at B&H Publishers for sending me a free review copy of this Bible (My review did not have to be favorable)!

This book may be purchased at Amazon.com and at Christianbook.com