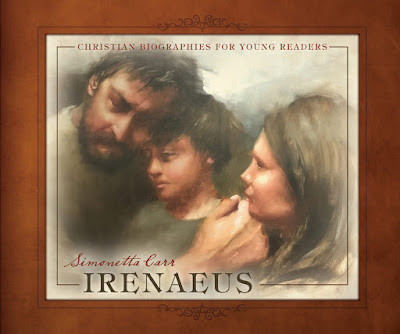 Like all of the books in the Christian Biographies for Young Readers series, this one is a great introduction to its subject. In this book, one is introduced to Irenaeus of Lyon, a Christian who lived during the early days of the church, his mentor was Polycarp who had known the Apostle John. Irenaeus helped keep Christians of his day anchored to God's Word by speaking and writing against many heresies that were spreading at the time.

I really like that Carr doesn't just tell the factual details of the lives she writes about but also delves into some theological concepts and even doctrinal controversies.  It's good for young people to learn details about the defense of the right interpretation of God's word.  In this volume, she does a good job of explaining some of the heresies that Irenaeus fought against, including providing some details of his critique of the bad hermeneutic of people who took the Scriptures out of context, twisting them to say other things: "He gave the example of a poem made up of separate lines from different books by the Greek poet Homer.  The lines had nothing to do with each other, but together they made up a poem Homer had never intended to write.  A casual reader would think the poem was really Homer's."  I found it amusing to find that, when Irenaeus had critiqued some ridiculous and confusing Gnostic teachings, he ended his written explanation of their views with an exclamation akin to our "Eek!" expressing his view of the absurdity of what they believed. Apparently Irenaeus had a sense of humor.

As usual, Carr's book has many illustrations imagining what events in Irenaeus' life may have looked like, and also many photographs of places and things, including historical artifacts from that day, as well as some pictures of more recent statues of what others imagined how Irenaeus and Polycarp appeared. There is not a lot of information about Irenaeus' life but Carr does a good job of explaining the things that we do know about him and also inferring things that might have been the case based on what we know of that period in time.  All in all I think this is a good summarizing biography.

I think it's perfectly fine for kids to read and hear works of fiction, but I think it's also good to let them learn about real Christians who lived in the past.  Real people who lived and died fighting the good fight of faith.  What better way to put one's imagination to work than contemplating real events, real Christian people and the teachings of God's Word?  This book is one of a series of books that are a good way to have young people (and older people) practice doing that.

Many thanks to the folks at Cross Focused Reviews for sending me a free review copy of this book!  My review did not have to be favorable.

This may be purchased at (among other places) Amazon.com
Posted by Sarah L. at 2:34 PM