I became interested in reviewing this book when I saw a preview of it online.  365 Classic Bedtime Bible Stories (inspired by Jesse Lyman Hurlbut's Story of the Bible) illustrated by Alessia Girasole is geared towards children ages 3 and up and, from what I saw in the preview text online, it looked like it might be a pretty good resource to have for teaching kids. 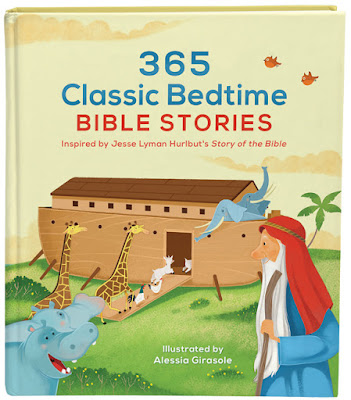 Upon first examining the book I was very pleased to see that they didn't seem to be trying to cut out the more gruesome and sad parts of the Bible.  Some of it struck me as sadly amusing, mainly because of the illustrations.  To give an example, one of the 'stories' gives the account of the 'scoffing' nobleman who didn't believe Elisha when he said that food would be sold at extremely low prices the following day (there was a severe famine in the land).

The nobleman died the following day from being trampled by people rushing toward the food.  This is illustrated (bloodlessly) in the picture accompanying the story.  It amused me because the pictures in the book are rather 'cutsey' looking cartoons and are geared more for very young children and here is this illustration of a man being trampled by a bunch of people! It also struck me funny because the back of this book describes it as being a way to make "bedtime reading a delightful learning and faith-building experience for both you and your kids."

One of those 'delightful' stories happens to be one that ends with that ends in this way: "He was knocked to the ground by the crowd and crushed to death."  Sweet dreams kids! Just kidding.  It's good for kids to learn the truth, and it will probably be a good discussion starter about belief in what God says, assuming that you want a discussion started at bedtime.  Or you could just read the next two stories after that.  I say two because if you are reading on, in order to end on a happier note, you won't want to end on the next story either as it ends with a man being smothered!  An illustration is provided for that one as well though it only shows the man ABOUT to be smothered, not in the process of being smothered (if that's any comfort!).

Sadly, though, there were several exceptions to their accurate accounts of events in the Bible. I'll give three examples:

1. The sections that give the account of Gideon's life end with the statement, "There were, at different times, fifteen judges over Israel.  But of them all, Gideon had the most wisdom, courage, and faith."  Where did they get that from? Do they even remember what happened later in Gideon's life? Gideon requested that people give him gold, "And Gideon made an ephod thereof, and put it in his city, even in Ophrah: and all Israel played the harlot after it there; and it became a snare unto Gideon, and to his house. "(Jdg 8:27)  That doesn't give the impression that Gideon was even close to being the best judge of Israel.

2. When speaking of the account of David and Bathsheba, this book says that when David saw her "He loved her and wanted her to be his wife" and so he had her husband Uriah killed.  No… David committed adultery with Bathsheba before having her husband killed and he apparently had no intention of taking Bathsheba for his own wife until he had learned that she was pregnant and couldn't set things up to make it seem as though Uriah was the father. That's when he had Uriah killed.  The people who put this together didn't have to go into great detail of course, but they didn't have to resort to giving inaccurate Biblical history.

3. The same with the account of Saul in the cave.  This book says that he rested in the gave while David and his men were hiding in there (it even has a picture of Saul wrapped in a blanket sleeping in the cave), and that David cut a corner of Saul's robe while he was sleeping.  But, that of course was not what Saul was doing.  They could have said that he was "using the bathroom" or "relieving himself" and let parents do the explaining.  Or they could have just said that he was in a cave. But say that the Scriptures say something that they did not say!

One more thing, and this is somewhat minor, the words used in the book could have been dumbed down a bit more,  down to the level of a little kid's intellect.  Instead of saying, "He remained there", they could have said, "He stayed there."  Or Instead of "He wept", they could have said "He cried" and so on.  Not only would it make it easier for little kids to understand but it would make it more consistent with other parts of the book where they actually did change it to more modern vernacular.  They  used statements like, "It was stinky", "Come on" and "You're phonies!".  So why do that with only some of the text and yet leave others that are easily changed to something simpler?

The pictures are interesting and kids like looking at them (a couple of my little brothers seem to like them), they generally fit well with the stories. though not all of them are accurate.  I'm pretty sure that Aaron should be illustrated as being older than Moses, not younger (Moses has grey hair and Aaron has brown hair in this book).  I mainly wish that they had chosen not to depict Christ in the illustrations, or at least not to show His face.  That would be more respectful.  Instead they make Him look like a European man with long hair.

Overall, though, the people who put this book together seem to have done a pretty good job in many of the 'stories' they recount, sticking closely to the text of the Bible in their summaries.  My little brother enjoyed listening to some of it and talking about the pictures.  Just be ready to read it with scrutiny, and with verbal criticism and explanation to make sure that your kids are getting accurate information.

This book may be purchased at Amazon.com and at Christianbook.com
Posted by Sarah L. at 4:56 PM