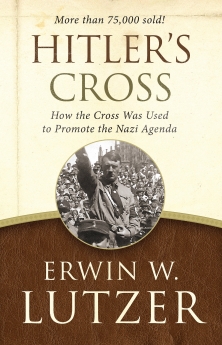 Why and how did Hitler ever come into power?  Was it because Satan had the upper hand over God? Was God powerless to stop it?  As Mr. Lutzer asks, "Is God only involved when righteous leaders are installed and uninvolved when a leader is something less than distinctively Christian, or even evil?" Of course, the answer to this is that God is always involved, otherwise He is not God. This is something that I really like about Lutzer's book Hitler's Cross. He reminds us that Hitler's ascension to power was not an accident, it was not outside of God's power. Lutzer reminds us of Romans 13: "...there is no authority except from God, and those that exist have been instituted by God." Satan himself is not outside the realm of God's sovereignty, every move he makes works perfectly into God's plan.  Speaking of God's sovereignty in even evil things that take place, the author comments:  "Some prefer to call it His 'permissive will,' but it is His will nevertheless. He directs all things to their appointed end." and again: "Those Christians in Nazi Germany who believed that evil was triumphing because God was too weak to stem the tide could find no hope in their distress."  This is comforting to we who are Christians, nothing, even evil, is stronger than God, and nothing can take place without His will!

It was fascinating to me how Hitler used religion to gain over professing Christians in Germany.  Much of Germany was religious at the time, the Lutheran church was connected with the state.  Instead of wiping out the church, the plan was to infiltrate Christianity, politicize it (more than it already was) and change its doctrines bit by bit until true Christianity vanished altogether. Christian Jews  ended up being required to worship separately from Christian Aryans, Pastors were eventually required to swear an oath to Hitler, Nazis even planned that Hitler's Mein Kampf would take the place of the Bible in the churches. The official church in Germany became the 'Reich church' .

Lutzer points out that there were Christians who were against  the Nazification of Christianity, even at the cost of being sent to consecration camps and/or death. Refusing to take the oath of loyalty to Hitler as the head of the Pastors, they declared that God's word was their authority, and they also declaring that Jews and Christians are one in Christ, therefore there should be no ethnic discrimination in the church of God. By separating themselves from the official church(now the Reich church) and the so called 'German Christians' they were not apostatizing from the church, rather they were declaring the political Reich church apostate.

Lutzer sees that there are parallels between what led to Germanys being Nazified and things in America today. After world war I the Germans had a short lived Republic, they gave up this Republic for a dictator because the economy was very bad. Under Hitler's regime "Workers now had job security, a health service, cheap holiday schemes; if freedom meant starvation, then slavery was preferable." They gave up freedom for temporary safety. Which is something that America may be headed toward.  Lutzer makes us ask questions:  what will we do if things become like they were in Nazi Germany. What are we doing now? What decisions are we making now in our Christian life, what do we truly hold as valuable?

I've read this book before, several years ago.  I remembered having really liked it at the time and recently decided that it would be nice to read it again.  My perspective has changed over the years, and though I still like the book, I've noticed statements in the book that I don't seem to have noticed before. For instance, Lutzer uses Matthew 25:35-36 (I was hungry, and you gave Me something to eat; I was thirsty, and you gave Me something to drink…etc.)to say that when the Jews were persecuted, it was the Lord Jesus Christ who was suffering and therefore Christians should have focused on helping them.  But I'm pretty sure that Lutzer is using that passage incorrectly, it clarifies that " ..Verily I say unto you, Inasmuch as ye did it unto one of these MY BRETHREN, even these least, ye did it unto me."(vs. 40  ASV - emphasis added by myself).  Who are Christ's brothers and sisters? Christ Himself says, "Who is my mother? and who are my brethren? And he stretched forth his hand towards his disciples, and said, Behold, my mother and my brethren! For whosoever shall do the will of my Father who is in heaven, he is my brother, and sister, and mother." (Mat 12:48-50 ASV) And in Luke 8:21 He says, "But he answered and said unto them, My mother and my brethren are these that hear the word of God, and do it (ASV).  This would seem to indicate that Christ's brethren are Christians, His followers.  And Christ also says that this is how the world will know that we are His disciples, "if you have love for one another".  The whole New Testament seems to emphasize focusing on Christians loving and caring for other Christians and meeting their needs more than it does meeting the material needs of unbelievers.

Perhaps I sound absolutely horrible in saying that! I sound strange to myself! But I’m NOT saying that Christian shouldn't have helped the Jews.  What I'm getting at is this:  if they didn't go out and actively seek Jews to hide or help, were they being disobedient to the Word of God? That is one of the questions I'm struggling with.  Yes they should have stood up to the law that no Christian of Jewish descent could become a pastor, yes they should have stood against the politicization of the church and establishment of Hitler as its head.  But what if, besides dealing with those issues that directly affected their brethren, they did not focus on primarily helping unbelieving Jews in need, but focused mainly on helping their fellow Christians in need (both Jewish and non-Jewish believers in Christ as their Savior and Messiah?).  What if they mainly fed and clothed their fellow saints, took them in and visited them in prison over and above helping non-believers? Would they be sinning if they did this?  Would they be turning their back on Christ if they focused on serving their fellow Christians over and above serving non-Christians?  Will Christ say that He never knew people who focused their lives on serving their spiritual brethren who do the will of God?

To apply this to the present day: What if we Christians don't focus on ending abortion (the killing of little babies in the womb)? Yes, we absolutely want it stopped, but how much of our lives ought we to biblically devote to stopping it?   How far should we go? Should we kidnap any pregnant woman who says that she will have an abortion and free her when her baby is born alive? Are we sinning if we don't go out every year and picket abortion clinics? What if we don't devote some of our lives to ending slavery in the world? Or ending child abuse, spouse abuse or human trafficking?  What if we focus the majority of our lives on loving our fellow saints? Will Christ say that He never knew us?

Of course, we Christians will help unbelievers, if we have opportunities to help them, materially and spiritually.  We are to walk with wisdom and have gracious speech toward "outsiders' (Col 4:5),  keeping our behavior pure, to love our enemies and do good to those who hate us, blessing those who curse us,  showing hospitality and are told, "as we have opportunity, let us do good to everyone"  and yet even that statement is qualified by the next: "and especially to those who are of the household of faith."(Gal 6:10 ASV).  I just can't get over the strong emphasis of the New Testament on helping one's fellow believers.

Again, I am not saying that the Christians in Germany should not have helped Jews who came their way.    I'm simply saying that I'm starting to think that Lutzer goes too far in his implications that the church in our day needs to focus on stopping the practical evils of our day: abortion, slavery, child abuse…etc.  And that it needs to focus more on helping the unbelieving world.  I think that biblically, the church in our day needs to focus more on loving our fellow believers.  Christ says " By this all people will know that you are my disciples, if you have love for one another." (Joh 13:35)  And I'm not sure that that is the reputation of the church in our day, which I suspect has more of a reputation for its love for unbelievers than its love for believers.

I don't want to sound nit-picky, I just felt like I needed to say something about that. There were some other things as well, but I won't bring them up here.  But I still like the book overall. it is a fascinating recounting of the heavy influence of Nazi Germany on the 'Christian' worldview of many of the Germans at that time, and how the churches reacted or didn't react to it.  Many churches of that day proved that their focus was temporal, while others were willing to suffer for the truth of the Gospel.  It really makes you think about how we would react in our day.  Are we willing to suffer and lose everything in this life for the sake of Christ? Will we panic if another 'Hitler' arises in our day and becomes the President of the United States of America? Or will we realize that God is still in perfect control and be willing to suffer persecution for doing what is right?  The sovereignty of God over all the affairs of this world is something that we Christians need to come to realize now, and then we won't have to wrestle later with fears and doubts about His power and about whether or not all things are working together for our good (Rom 8:28-29).

Many thanks to the folks at MPNewsroom (Moody Publishers) for sending me a free review copy of this book (My review did not have to be favorable)!

This book may be purchased at places like Amazon and Christianbook.com
Posted by Sarah L. at 7:20 AM