The CSB Reader's Bible is designed to make it easy to sit down and just read each individual book. It is more along the lines of how it would have been read by the early Christians whose Bibles (or sections of the Bible/individual letters) were not divided into chapters and verses until many, many years after the Apostles had died. The text of this "Reader's Bible" is in a single column, like a regular book, instead being placed in two columns.  It has no chapter numbers and no verse numbers. 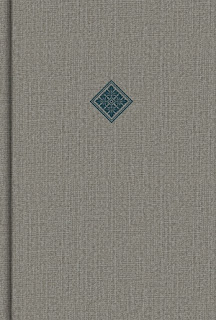 This edition is a nice looking grey cloth over board volume, and includes an attached ribbon marker.  The font is a nice size and seems about the size of a regular book's font and is a very readable edition. I do want to note that the pages are very thin and quite flimsy, much like, or exactly like, a regular Bible's pages. I think that the edition would be nicer if the pages were the same thickness as a regular book's.  But perhaps they would have to divide it into several volumes if they did that, and it might be heavier as well.  This one still works very well.

The only real problem I have with this Reader's edition is that, though they do remove the chapter numbers, they leave the chapter breaks and make the first letter of each 'chapter' large (and colored blue). To me that rather defeats the point of removing the chapter numbers.  I don't necessarily mind chapter breaks in the narrative portions, and other portions that require it to make reading easier, though I do wish they would leave them out altogether in the Epistles/letters.  I do wish that they had taken advantage of the reader oriented design and completely revamp the chapter breaks to make the text flow more smoothly than a regular Bible's which have (at least to my mind) some unnatural chapter breaks that disrupt the flow of thought.  For example, here is how a portion of Malachi reads:

"I will have compassion on them as a man has compassion on his son who serves him.  So you will again see the difference between the righteous and the wicked, between one who serves God and one who does not serve him.

For look, the day is coming, burning like a furnace, when all the arrogant and everyone who commits wickedness will become stubble."

Or as another example, in Acts, where Stephen is brought before the Sanhedrin:  "And all who were sitting in the Sanhedrin looked intently at him and saw that his face was like the face on an Angel.

'Are these things true?' the high priest asked.  'Brothers and fathers,' he replied, 'listen…."

They could have omitted the chapter breaks, kept the text together and these texts would read much better without interruption.

But all in all, this is a very nice Reader's Bible.  I really like the idea of going closer to how the text was originally laid out.  It is nice having other Bible editions around without the extra numbering and unnecessary dividing of the text. Again, I am not against chapters and verses, but editions like this truly do make the Bible more 'readable', as it were, and helps one to remember that "context is king".  Rather than viewing the Bible as little chunks of numbered statements that can be divorced from their context, it lends more to one seeing the text as an inspired whole.

Many thanks to the folks at B&H/Lifeway for sending me a free review copy of this book. (My review did not have to be favorable)

You may purchase this book are Amazon.com and Christianbook.com
Posted by Sarah L. at 9:17 AM