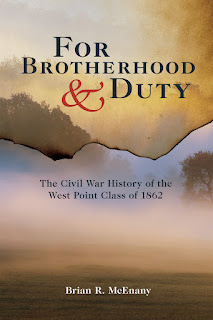 It is fascinating to look back on history and zoom in as it were on the earth to see what God had ordained to happen in a particular country, during a particular time period.  And to focus in on it even further and see what He had planned for individuals.

For Brotherhood & Duty: The Civil War History of the West Point Class of 1862 by Brian R. McEnany is a very interesting look at a group of some of the young men affected by the Civil War.  They came together in 1858 from north and south of the United States to study at West Point, expecting to serve in the same U. S. military when they graduated.  The secession of many Southern States and the U.S. government advocating military action to subdue those states changed things.  Some of the cadets ended up leaving West Point to join the Confederate states, others took the required oath to be faithful to the Union.

The author uses West Point Graduate (1862)Tully McCrea's story as a sort of springboard for the others.  After being wounded during the war, McCrea went back to West Point as an instructor while he recovered.  This book imagines what it may have been like for him to look back to his life as a cadet and also his life during the war.  Each chapter begins with a bit of fictionalized imagining of McCrea's daily life as an instructor, events during the day lead up to him having a flashback, as it were, of his and his classmates history.

This book follows these men from their entrance into West Point, their years of study and discipline up until the events leading up to the Civil War caused friction and division, resolve in many cadets to fight for the union, and in a few others to fight for the rights of the Confederacy.  Then you are led through the war and various battles, observing the actions of various individuals, from this particular West Point class, through the war itself.  I particularly liked that the author uses many excerpts from the men's own accounts of daily events and battles so that you can 'hear things' in their own words, getting an eye-witness' perspective

There were several little tidbits of history that I found quite fascinating. Like the fact that the West Point Campgrounds, which every year were named after a well-known person, had, shortly before the Civil War, been named after Robert E. Lee and also Jefferson Davis. Also, the class of 1862 had instructors who became famous later on in the war, including Edward P. Alexander and John F. Reynolds.  It was intriguing to find that, because of the unique events of the time, the oath that West point cadets took e was changed, twice, to make it clear that they were swearing alliance to the union over the individual states, "I will maintain and defend the sovereignty of the United States, paramount to any and all allegiance, sovereignty, or fealty I may owe to any State…" , and then changed again to be even more strict.  The new oath(s) overrode any particular questions as to which was to have the paramount loyalty, the union, or one's home state.

The Cadets did not all serve in the same part of the military, they were scattered around the U.S. military and the Confederate military. Some took part in battles that others were not involved in, some served closely with fellow classmates, some fought against fellow classmates, some were wounded and some were killed.  The men participated in many famous battles, including Antietam, Fredericksburg, and of course, Gettysburg.  All the way to Appomattox.  There are battle maps and pictures throughout that really help to visualize things.  At the end of the book is a helpful compilation of individual summarized biographies, and pictures, of the Class of 1862.

I learned a lot from this is very interesting and very well-written book. I would recommend it to anyone interested in the Civil War, or history in general.

Many thanks to the folks at the University Press of Kentucky for sending me a free review copy (my review did not have to be favorable)!

This book may be purchased at Amazon
Posted by Sarah L. at 10:21 AM