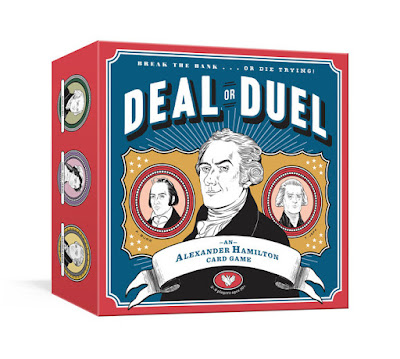 Deal or Duel: An Alexander Hamilton card game, is a game that utilizes historical characters from the early history of the United States and also utilizes events of that time to influence play. This game is very unique, at least in my experience of playing games.  I don't believe I've ever played a game before that included dueling and going to debtors prison. Nor, have I ever played one with historical figures who, in the process of playing a game, could be affected by events like Alexander Hamilton leveling the playing field for his pursuit of the office of Secretary of State and thus specific Face Cards in various players possession are lost.  This game has many historical figures (the Face Cards),  including Alexander Hamilton, Marie Antoinette, George Washington, Aaron Burr, and there was also figures whom we did not know of, which is where the biographical summaries on the back of the cards come in handy.

I tried it out with a couple of my sisters, it started out slow and then the pace quickened as we caught on and started having more fun.  There are two ways for a player to "declare victory", either by collecting 1000$ (Federalist Method) or by eliminating all of your opponents Face Cards and having at least one left yourself (Democratic-Republican method).

This game is educational in a rather warped, but amusing, way.  You get to learn about events in American history, but not necessarily learn about them in order. You get to learn about dueling (not sure how that knowledge will come in handy) and make historical characters, most of whom never dueled in real life, duel each other.  The Hamilton Cards, one played at the beginning of each round, really make the game.  They change things up by having random events happen, refilling the treasury, changing the value of certain cards, eliminating particular Face Cards, making holders of certain cards play taxes…etc.

My sisters and I had a lot of fun once we got going.  We laughed quite a bit, had our characters participate in many duels, made each other pay money by saving each other's life, getting one another jobs, or another such thing based on whatever cards we had in our hand.  We also lamented, all while being amused, when we found that we could randomly lose certain characters.  The time passed very quickly.  The whole concept of the game is very amusing.  We ended the game with a duel between Phyllis Wheatley and, I believe it was Thomas Mifflin she dueled!  Mifflin won.

It was fun, but I need to warn people that the game is rather complicated, we had to study the rules for a while and keep referring to them trying to clarify things.  And not everything was made clear.  For instance, at one point some of us only had "Duel Cards" and yet all of our remaining characters were in debtors prison and so we didn't know what to do.  We scanned the rules but didn't find anything.  Do we redeem our Face Cards out of prison and make them fight a duel? What if we didn't want to pull our people out of prison and challenge someone to a duel?  Do we have to do it? Sometimes we just decided that we could discard one of our Duel Cards and draw another Action Card.  But we weren't sure that that was the right way to play, and many times we just ended up with another Duel Card.  We ended up making it so that we could 'spend' a card on our turn, and yet have nothing be accomplished.  As an example, instead of using one of my Duel Cards (there being no one I could challenge who was outside prison), I would use a card that said "Receive $30 from the treasury to help cover your safe passage home from Paris", despite there not being any money I the treasury.  I wouldn't get any money for the card, but I had no other card to use as I only had cards related to dueling. It would be nice to know what to do if you don't have any cards to play. I recommend that the game makers update the instructions.*

But all in all, it was a rather fun game.  We're planning on potentially playing it with three of our other sisters and seeing what a six player game is like.

This game may be purchased at Amazon (Among other places)

* We cleared up the: what to do if you only have duel cards but everyone who can duel is in Prison:  There is a spot in the directions we didn't notice that says that you must have at least one Face Card always in your roster(out side of the prison) - so there will always be someone to duel.  But what if all the dueling spaces are taken up and you only have duel cards? That is still in question.