One of my favorite ways to learn history is by reading  books that focus on an individual event in that history.  I like overviews too, but I especially  like to "zoom in", as it were.  One of the ways in which I like to do that is by reading biographies of individuals in that time.  One of the other ways is to read books that focus on various individuals experiencing the same event. 1777: Tipping Point at Saratoga, by Dean Snow, is one of the latter. 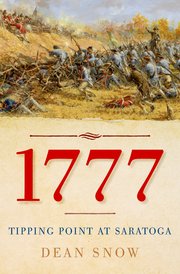 The time period is that of the American War of Independence, the year is 1777.  General Burgoyne is heading toward Albany in an attempt to cut off New England from the other Colonies.  It is a risky move that may end up with him being cut off from supplies.  General Horatio Gates is waiting for him to show up.  The two armies end up clashing and Burgoyne finds that he is cut off from supplies and that all his enemy has to do is wait for him and his men to get hungry enough to either surrender.  The whole while the continental army is growing day by day.

It is quite an interesting read, switching in between the perspectives of various people on both sides.  There are the two opposing generals, there are other officers of both sides, and several couples on the British side (some women joined their husbands and followed the army around).  The narrative generally moves day by day, showing you particular characters in certain hours of the day and what had led up to that hour.  All in all, it's quite intriguing and carries one along - you really want to know what is going to happen to the various people,

There are a few problems that  I had with the book.  First, take a look at this paragraph: "The founders tended to be Deists, or at least sympathetic to Deism, people who were skeptical of religious ideology, skeptical of institutionalized religion in general and of Christian doctrines in particular."  I feel wary about those statements, I have never gotten that impression from the history that I've read, but perhaps I just haven't delved into it enough. Anyway, he goes on to say, "This predisposed them to favor flexible democratic processes over rigid absolutes.  The Constitution eventually accomplished the intended objective, emerging as an amendable document subject to improvement."  That makes the constitution seem more like a suggestion than a standard of law.

Also there was one instance that I know of fiction, an elderly woman helping her husband by loading muskets who then cannot resist peeking over the top of the rampart and gets hit in the face by a musket ball.  The beginning of the book mentions that a skeleton of an elderly woman had been found with her face blown out.  The theory of how she died is, of course, a plausible theory but not known fact.  I would rather that that that would have been incorporated as theory in the narrative, not stated as fact.  It just makes me wonder if there are other places in the book that are fictional guesses as to what happened.  I do believe in rigid absolutes in certain areas, including the topic of history, and something factual happened to that woman, it isn't up to those who follow her in history to make up their own story of her death and present it as fact.

One more thing, I had some trouble understanding the maps with indicators of where the armies were in the map.  It's probably just me though, others will probably understand it well.

Otherwise I really enjoyed reading it.  I liked seeing the different perspectives and events of that section of days in 1777.

One of the places where this book may be purchased is on Amazon.com
Posted by Sarah L. at 12:58 PM