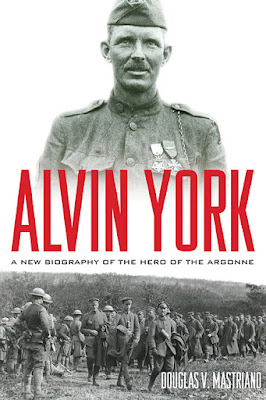 Alvin York: A New Biography of the Hero of the Argonne by Douglas V. Mastriano is a very interesting account of the life of this man, of what happened on the battlefield in World War 1 that elevated York, a former pacifist, to fame.

Alvin York was born into what became a large family, the third of eleven children (the family lived in a one room cabin on a farm by the way!).  His two older brothers where married and had farms of their own when his father died and so York became the head of the family.  After this, despite having been born into a Christian family, York went downhill morally and became a heavy drinker and a gambler, and of course, associated with bad people.  He acknowledged that his sins started small and then these things became controllers of his life.  Change came when York became a Christian and actively put away and resisted his old habits, he truly became a "new creation", a new person.

When war broke out between the United States and Germany in 1917, Alvin York faced the strong possibility of being drafted.  He had become a pacifist by this time, struggling to reconcile His new found life in service to God and passages in the Bible that he thought indicated that Christians should not physically fight and kill other people, even under the authorization of their own government.  He appealed for exemption from military service, but his appeal was denied and he was called up to serve.  Alvin's pastor encouraged him to trust God in all of this, and Alvin obeyed the draft summons and joined the army.  I thought that it was neat to see his acknowledgement of the sovereignty of God in all of this, making sure to be obedient and serve well in this place where God had placed him, even though to be there was against his own will.

Still burdened in conscience about killing other people, York finally approached his commanding officer with his concerns, which officer brought him to another officer, and both of them graciously discussed what the Scripture had to say on the subject, York quoting Scriptures that he thought supported pacifism, and the officers bringing him to Scriptures that indicated that the Bible was not against war.  He ended up becoming convinced that it was okay for him to go to war, though perhaps still having some struggles with doubts for a little while afterward.  And so York stays in the fighting of the section of the army, and ends up making the famous capture of 132 German soldiers, which event, and the aftermath of York's life are also recounted by the author.

I thought that that  Mastriano did a very good job with this biography, it was well written and interesting, and there are many excerpts from York's personal accounts and statements.  At the end of the book, there is as chapter dealing with his research into the spot where the famous event happened, showing pictures of the bullets and giving accounts of other archaeological evidence confirming the location, and York's account, of the event.

I also liked many of the little details that are given, such as where it is noted that York's wife Gracie did not like the part in the movie that ended up being made about York where she and York are seen  kissing before they are married - which they apparently did not do in real life.   And as another example, I was especially surprised to find out that part  of the motivation for the particular attack on the Germans, in which York's division participated (and in which York became famous), was to free 'The Lost Battalion.'

York was a very interesting and principled Christian man, and humble as well as is evidenced in his endeavor to honor those men who were with him and give the credit to the Lord for what he was enabled to do.   This is an inspiring biography.

One of the places where this book may be purchased is at Amazon.com
Posted by Sarah L. at 3:52 PM