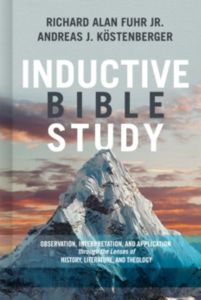 Looking for a book that will give you good guidelines for studying the Bible well? Inductive Bible Study by Richard Alan Fuhr Jr. and Andreas J. Kostenberger is a good resource on the topic. As the authors of this book explain, God chose to reveal His will to us through His written Word, rather than through personal revelation/new revelation.  He chose that it would be learned progressively with effort rather than instantly without any work on our part. We should revere God's choice method of conveying the knowledge of Him that He wants us to have and His will that is revealed through this collection of holy documents.  Fuhr and Kostenberger take you through a series of steps that will assist you in reverently discovering and handling what God's Word says with accuracy and reverence.

The steps you are taken through range from: comparing English Bible translations, Asking the right questions of the text, using commentaries, word studies, practicing discernment and of course, one of the most important steps of all, recognizing the importance of context and authorial intent.  It is pointed out that, "Those who read the Bible with little awareness of surrounding context often do so because they have been trained (by example) to think through Scripture in terms of devotional nuggets, memorizing verses and reading for inspirational insight rather than interpretive understanding."  Context is emphasized strongly, and related to that, I very much appreciate the cautions about word studies (though they are still encouraged),  where it is made clear that when studying individual words or phrases in a passage, it should be remembered that the meaning of those words will ultimately be discerned through the surrounding context of the phrase, not just their bare lexical meaning, "contextual meaning will always take precedence over lexical meaning."

The authors write very well, are easy to understand and the steps in each section are outlined in charts, which helps with remembering and simplifying what one has learned.  They give illustrations to demonstrate hermeneutical errors, some of which I found sadly amusing. For example, Fuhr talks about a missionary conference that he once attended where the theme verse was Joel 3:14, the verse was used as a reference to people ready to make a decision for Christ, but when one looks at the surrounding context of the verse, the 'decision' referenced in the verse is referring to God's decision to bring judgment on the nations, not salvation!

They recommend many study resources (look for these in the footnotes as well), and also provide demonstrations of the inductive method by using it on various texts of the Scripture.  Being 'doers of the Word' and not merely 'hearers' of it is also stressed.  They make the interesting argument that, "While the Holy Spirit is certainly capable of providing interpretive insight, we'd suggest that illumination has more to do with appropriation than interpretation."  In other words, the work of the Holy Spirit is more seen in the Christian's personal application of the truths of Scripture to their life than by their coming to the correct conclusion as to the meaning of any given section of Scripture (though this is very important of course).  They do clarify that not all texts of the Scripture are necessarily directed at 'doing', some texts give us more knowledge about the God whom we serve by obedience to His will (by the enablement of the Spirit).  But both are a part of what we glean from our Bible study: knowledge of God and His will, and then living in light of the revealed truth.

I want to mention two more things, first, ironically I must admit that I disagreed with some of their conclusions on the interpretation of some example texts (I will probably take another look at them), but the authors themselves encourage the reader to not be afraid to disagree with a Bible commentator if one thinks (by means of correct hermeneutics of course) that a they are not interpreting a text correctly.  Also, the authors kept using female pronouns when speaking of any given Bible studier, which terminology was rather tough to get used to (despite being a female myself) and was rather distracting.  I think that using male pronouns would be more in keeping with the Bible's teaching of male headship and of woman being taken from man in the creation rather than vice-versa. it simply seems more biblical to have any given person referred to with masculine pronouns rather than having a male read feminine pronouns and apply them to himself.  I understand that our culture is very concerned about gender inclusiveness, but this book is primarily directed at Christians, most of whom would (or at least should) have already come to grips with the primarily masculine pronouns of the Bible, especially those that, though masculine, refer to both male and females. To me it's like someone using the term "womankind" to refer to both males and females, instead of 'mankind'.  I am just not comfortable with it.

But overall, I really liked this resource, and would recommend it to pretty much Christian looking for an aid to accurately studying the Word of God.

Many thanks to the folks at B&H publishers for sending me a free review copy of this book (My review did not have to be favorable).

Here are a couple of the websites where this book may be purchased:  Amazon.com and christianbook.com
Posted by Sarah L. at 4:26 PM